Abstract
A new species of the genus Amolops Cope, 1865 is described from Nyingchi, southeastern Tibet, China, based on morphological and molecular data. The new species, Amolops nyingchiensis sp. nov. is assigned to the Amolops monticola group based on its skin smooth, dorsolateral fold distinct, lateral side of head black, upper lip stripe white extending to the shoulder. Amolops nyingchiensis sp. nov. is distinguished from all other species of Amolops by the following combination of characters: (1) medium body size, SVL 48.5-58.3 mm in males, and 57.6-70.7 mm in females; (2) tympanum distinct, slightly larger than one third of the eye diameter; (3) a small tooth-like projection on anteromedial edge of mandible; (4) the absence of white spine on dorsal surface of body; (5) the presence of circummarginal groove on all fingers; (6) the presence of vomerine teeth; (7) background coloration of dorsal surface brown, lateral body gray with yellow; (8) the presence of transverse bands on the dorsal limbs; (9) the presence of nuptial pad on the first finger in males; (10) the absence of vocal sac in males. Taxonomic status of the populations that were previously identified to A. monticola from Tibet is also discussed. 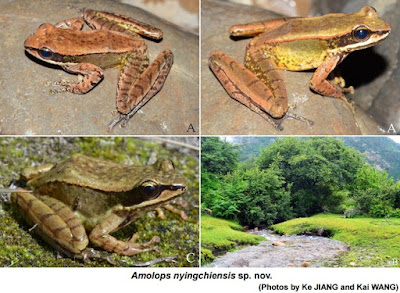 Etymology: The species name “nyingchiensis” is the Latin form of name of Nyingchi Prefecture, which includes the two localities of the new species. According to the Latin name, we suggest the English common name as “Nyingchi Cascade Frog”, and the Chinese common name as “Lin Zhi Tuan Wa” (林芝湍蛙).

Ecological notes: The new species, A. nyinchiensis is found in the small to medium sized, fast flowing streams near mixed forest at relative high elevation (Figure 4). At the type locality (Gedang), the stream is much faster, and has rocky shores, while at the other locality (Zhibai) the stream is slower, and the shores are covered by vegetation and not rocky. Such distinct microhabitats suggest a wide ecological niche of the new species. In Gedang, only the new species was observed, and in Zhibai, one amphibian species, Nanorana parkeri (Stejneger, 1927) was co-distributed with the new species, and one reptile species Pseudoxenodon macrops (Blyth, 1854) was also observed. Reproductive season of the new species is unknown.