Abstract
A new bufonid amphibian, belonging to a new monotypic genus, is described from the Andaman Islands, in the Bay of Bengal, Republic of India, based on unique external morphological and skeletal characters which are compared with those of known Oriental and other relevant bufonid genera. Blythophryne gen. n. is distinguished from other bufonid genera by its small adult size (mean SVL 24.02 mm), the presence of six presacral vertebrae, an absence of coccygeal expansions, presence of an elongated pair of parotoid glands, expanded discs at digit tips and phytotelmonous tadpoles that lack oral denticles. The taxonomic and phylogenetic position of the new taxon (that we named as Blythophryne beryet gen. et sp. n.) was ascertained by comparing its 12S and 16S partial genes with those of Oriental and other relevant bufonid lineages. Resulting molecular phylogeny supports the erection of a novel monotypic genus for this lineage from the Andaman Islands of India. 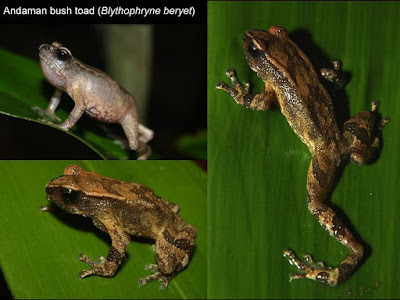 Etymology: The generic name is a patronym, coined in appreciation of Edward Blyth (1810–1873), the first curator of the Asiatic Society of Bengal, who initiated herpetological studies in the Andaman and Nicobar Islands, through his phenomenal, pioneering paper “Notes on the fauna of the Nicobar islands” (Blyth 1846). Das (1999) remarked, “Blyth is to be credited for the description of a large number of species from the Andaman and Nicobar Islands that are still valid. Blyth (1846) wrote the first account on the vertebrate fauna of these islands, and in 1863, compiled the first check-list”. Further details of Edward Blyth and his contributions to studies on Indian natural history are in Das (2004) and Sridharan (2013). The specific epithet ‘beryet’ (in Great Andamanese language; Andamanese.net) refers to ‘small frog’. We believe that the Great Andamanese knew of the existence of this small arboreal anuran that is here described as new species to science. We hope the name given here will also raise awareness about the dwindling, indigenous tribal populations in the Andamans, their culture and extinction of their tribal languages.

Vernacular name: ‘Andaman Bush Toad’ is proposed as the common English name for this new species, indicating its arboreal habit and restricted distribution as understood currently.