ABSTRACT
Two new species of Myersiohyla are described from the 1984–1985 Cerro de la Neblina Expedition in southern Venezuela, together with notes on the genus and a test of its monophyly, which has been challenged in recent studies. The inclusion of new sequences results in a monophyletic Myersiohyla that is better supported than in earlier analyses. One of the new species is similar to M. inparquesi, with which it has been confused previously. This newly described species has, like M. inparquesi, a tadpole with a dorsoventrally flattened body and the largest labial toothrow formula so far reported for anuran larvae (16/21). It differs from M. inparquesi in larval characters, adult coloration, and vocalization. The other new species is unique in having a color pattern composed of stellate melanophores over a greenish ground color. Comments on the holotype of M. loveridgei provide details overlooked in previous references to this rare species and stress the need to establish diagnostic characters that might differentiate it from M. aromatica. Furthermore, we report one specimen not assigned to any species from Huachamacary Tepui, only 25 km from the type locality of M. loveridgei. So far, all studied species of Myersiohyla have relatively large (2.8–3.2 mm), yolky ovarian eggs, a character state shared with several other frogs in Cophomantini (Hyloscirtus, Aplastodiscus, the Hypsiboas benitezi species group), and likely a plesiomorphic character state for the tribe. We report and illustrate the occurrence of a mental gland in some species of Myersiohyla and present a short discussion on odorous volatile secretions reported in some species of this genus. 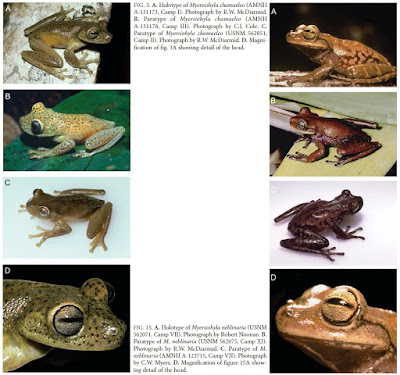