ABSTRACT
A geometric morphometric analysis, conducted as part of a taxonomic review of the genus Pseudoathyreus (Coleoptera: Bolboceratidae), allowed us to highlight the differences within a group of closely related species spread from the Sahel region to India, supporting the traditional morphological approach and confirming the presence of a newly discovered species (Pseudoathyreus zianii n. sp.).

Diagnosis: The new species is easily distinguished from the other two species of the same group by the anterior border of pronotum with a wide-based and a more or less stout conic horn. On the contrary, P. orientalis and P. flavohirtus share a low transverse carina in the middle of APB with the profile of a narrow curly bracket, with either a small and pointed mid-dle horn in the former species or a small and smoothed one in the latter. The central horn of the widespread African species P. porcatus (Laporte de Castelnau, 1840) looks a little like that of P. zianii but is larger, sharkfin-shaped, with a laterally compressed apex.

Name derivation. Named for our colleague and friend Stefano Ziani, renowned specialist of Coleoptera Scarabaeidae, who sent us the material of his collection, including the first specimen that turned out to belong to the new species. 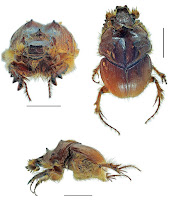