Abstract
An integrative taxonomic analysis based on morphology, color pattern, and the mitochondrial gene ND2 recovered four new species of Hemiphyllodactylus Bleeker that are endemic to the Shan Plateau or Salween Basin in eastern Myanmar. Hemiphyllodactylus ngwelwini sp. nov. from the Shan Plateau is part of the earlier described “eastern Myanmar clade” renamed herein as the north lineage and H. kyaiktiyoensis sp. nov. and H. pinlaungensis sp. nov. of the Shan Plateau and H. zwegabinensis sp. nov. of the Salween Basin compose an entirely new Burmese clade herein referred to as the south lineage. Although the north and south lineages come within 46 km of one another on the Shan Plateau, they are not sister lineages but sequentially separated by two lineages from Yunnan, China and another from northwestern Thailand. Hemiphyllodactylus zwegabinensis sp. nov. is the first species of this genus to be recorded from the Salween Basin and is known only from a wind-blown cloud forest on the top of the insular, karstic mountain Zwegabin in Kayin State. All other Burmese species except for H. typus, are endemic to the various localities throughout the Shan Plateau. These four new species bring the total number of Hemiphyllodactylus in Myanmar to at least 10 which is certainly an extreme underestimate of the diversity of this genus given that we discover new species at every upland locality we survey. 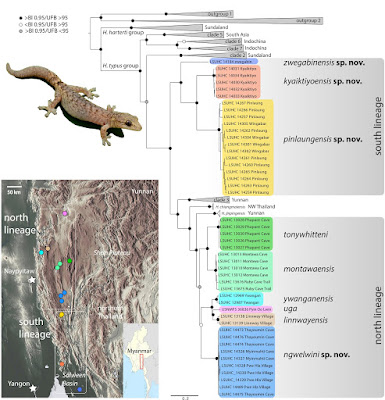 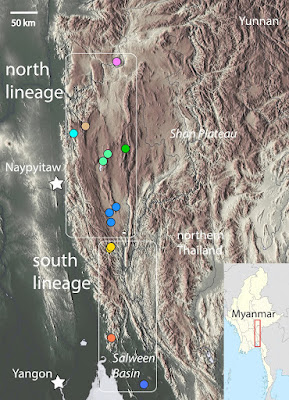 Etymology. The specific epithet recognizes and honors Mr. Ngwe Lwin, northern Program Manager of Fauna and Flora International in Myanmar. Mr. Ngwe Lwin has been supportive and invaluably instrumental in facilitating our field work in Myanmar since October of 2017.

Etymology. The specific epithet is a toponym referring to the type locality of Zwegabin Mountain.

Etymology. The specific epithet is a toponym referring to the type locality of Kyaiktiyo Mountain, Mon State, Myanmar.

Etymology. The specific epithet is a toponym referring to the type locality of Pinlaung City, Shan State, Myanmar.