[Herpetology • 2020] How Little is Known about “the Little Brown Frogs”: Description of Three New Species of the Genus Leptobrachella (Anura: Megophryidae) from Yunnan Province, China

Abstract
Asian leaf-litter toads of the genus Leptobrachella represent a great anuran diversification in Asia. Previous studies have suggested that the diversity of this genus is still underestimated. During herpetological surveys from 2013 to 2018, a series of Leptobrachella specimens were collected from the international border areas in the southern and western parts of Yunnan Province, China. Subsequent analyses based on morphological and molecular data revealed three distinct and previously unknown lineages, which we formally describe as three new species herein. Among them, we describe a new species that occurs at the highest known elevation for Leptobrachella in China. Four species of Leptobrachella, including two new species, are found in the same reserve. Furthermore, our results suggest that the population from Longchuan County, Yunnan, may represent an additional new species of Leptobrachella, although we tentatively assigned it to Leptobrachella cf. yingjiangensis due to the small sample size examined. Lastly, we provide the first description of females of L. yingjiangensis. Our results further highlight that both micro-endemism and sympatric distributions of species are common patterns in Leptobrachella, that contribute to taxonomic and conservation challenges in these frogs. We provide an identification key for Leptobrachella known to occur in Yunnan. Given the lack of knowledge on species diversity of Leptobrachella along international border areas, we recommend that future studies include trans-boundary collaborative surveys.
Keywords: Biodiversity hotspot, Conservation, Cryptic diversity, Micro-endemism, National border,  Speciation, Taxonomy 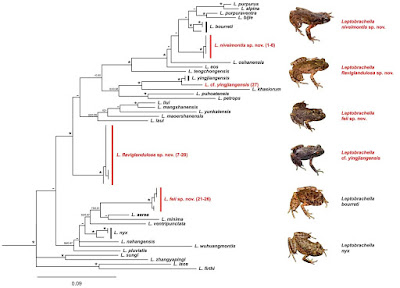 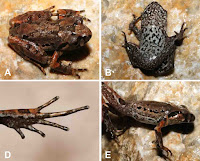 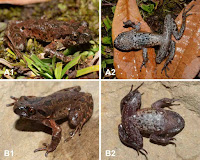 Etymology: The specific epithet “niveimontis” is a toponymic adjective derived from the Latin words “niveus” for “snowy”, and “montanus” meaning “related to mountains”, given in reference to the type locality of the new species, Mt. Daxue (literally “Great Snowy Mountain”) of Yunnan Province, China, and also in reference to the ecology of the new species, inhabiting high elevations in low temperature climate zones.
For the common name, we recommend “Mt. Daxue Leaf Litter Toad” (English) and “Xue Shan Zhang Tu Chan” (雪山掌突蟾) (Chinese).

Distribution and habits: Leptobrachella niveimontis sp. nov. is presently known only from its type locality, near Wumulong Ganhe Protection Station of Daxueshan Nature Reserve in Yongde County, Lincang, Yunnan Province, China. The new species was found along small creeks or rocky streams in well-preserved montane evergreen broadleaf forest at elevations between 2 569 m and 2 601 m a.s.l. (Figure 6). Leptobrachella niveimontis sp. nov. is the fifth known species of the genus inhabiting elevations above 2 000 m, and to the best of our knowledge it also occurs at the highest elevation as compared to other Chinese species of Leptobrachella. During our field surveys, calling males were recorded mostly inside the rocky crevices, and some were found hiding under leaf litter. Ubiquitous orthopteran-like calls could be heard along the stream from April to May, and very few calls were detected during July. The gravid female collected in April carried pure white eggs. 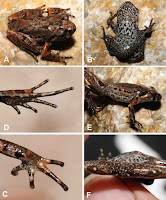 Etymology: The species epithet, “flaviglandulosa”, is a Latin adjective in feminine gender, derived from Latin “flavus” for “yellow color” and “glandula” for “gland”, in reference to characteristic life coloration of femoral, pectoral and ventrolateral glands in the new species.
For the common name, we recommend “Yellow-gland Leaf Litter Toad” (English) and “Huang Xian Zhang Tu Chan” (黄腺掌突蟾) (Chinese).

Distribution and habits: Leptobrachella flaviglandulosa sp. nov. is currently known only from Xiaoqiaogou Nature Reserve, Xichou County, Wenshan City, Yunnan Province, China. The species was found in the environs of the Fadou, Shangchang and Nanchang stations of the nature reserve. The new species was recorded along small seeps or clear-water rocky mountain streams in well-preserved montane evergreen broadleaf forest at elevations between 1000 and 1400 m a.s.l. (Figure 9). The new species was recorded in sympatry with L. bourreti and L. nyx. During our field surveys, calling males were found mostly while sitting on vegetation, and some were calling from rocky crevices. An insect-like calls could be heard along the stream from March to June; gravid female was collected in March bearing pure-white eggs.

Etymology: The specific epithet “feii” is a patronymic noun in the genitive singular; derived from the name of Prof. Liang Fei of the Chengdu Institute of Biology, CAS, China, in recognition of his long-term and significant contribution to the advancement of amphibian research in China, particularly his research on the family Megophryidae.
For the common name, we recommend “Fei's Leaf Litter Toad” (English) and “Fei Shi Zhang Tu Chan” (费氏掌突蟾) (Chinese).

Distribution and habits: Leptobrachella feii sp. nov. is currently known to occur at two disjunct localities: Xiaoqiaogou Nature Reserve, Xichou County, Wenshan City, Yunnan Province, China, and Daweishan Nature Reserve, Pingbian County, Yunnan Province, China (Figure 1); these two sites are separated by a flying distance about 150 km. The new species was found along small seeps in well-preserved montane evergreen broadleaf forest at elevations between 1 577 m and 1 850 m a.s.l. (Figure 9). The new species is sympatric with L. bourreti. During our field surveys, males were usually recorded while calling sitting on vegetation (usually on the members of the family Acanthaceae species; see Figure 9). Advertisement calls of the new species, resembling calling of orthopterans, could be heard along the streams from March to June; gravid female collected in April was swollen with pure white eggs.