Abstract
Numerous rivers, interrupted by large waterfalls and extensive rapids, drain the geologically ancient Guiana Shield Highlands. We describe a new armoured catfish genus and two new species endemic to the upper Ireng and Kuribrong rivers, respective tributaries of the Amazon and Essequibo basins in western Guiana. Corymbophanes ameliae sp. nov. is distinguished by having vermiculations on the abdomen, bands on the caudal fin, the anal fin i,5 and narrow caudal peduncle. Yaluwak primus gen. & sp. nov. is distinguished by having evertible cheek odontodes, a plated snout, a tall caudal peduncle and absence of adipose fin and iris operculum. We present a new molecular phylogenetic analysis inclusive of these and several related genera that suggests that the Corymbophanes clade (Araichthys, Corymbophanes, Cryptancistrus, Guianancistrus, Hopliancistrus and Yaluwak) originated in the Guiana Shield with secondary dispersal to the Brazilian Shield. Within the Guiana Shield, relationships among Corymbophanes and Yaluwak are consistent with geodispersal between drainages via headwater capture, although an uplift-mediated relictual distribution cannot be ruled out. ND2 haplotype structure among C. ameliae populations suggests that ichthyofaunal diversity on the Guiana Shield escarpment is shaped not only by inter-, but also intrafluvial barriers to gene flow.

Etymology: Named for Amelia, a Patamona Amerindian girl who disappeared near Amaila Falls in the late 19th century. The falls are named for her, but her name was misspelled. 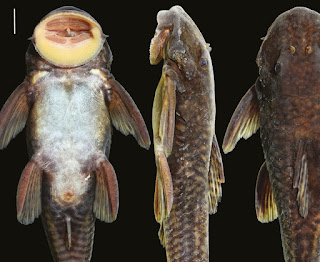 Etymology: Yaluwak is the Patamona Amerindian word for this species (and used generally for larger loricariids). The pronunciation of the ‘l’ in Yaluwak is a guttural ‘lr’ sound. Name is treated as masculine.
Included species: Yaluwak contains only the type species

Etymology: The species epithet primus comes from the same Latin word meaning first, foremost, chief or principal and is in reference to the large body size of the species and the fact that it retains the evertible cheek odontodes, likely inherited from the common ancestor of the Yaluwak/Corymbophanes clade. This species name was also inspired by our indefatigable Patamona guide, Mr Primus Peters, who led the collection effort for this species and assisted in innumerable other ways during our 2016 expedition to the upper Ireng River. 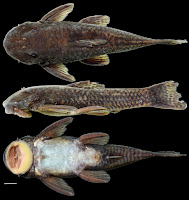