Abstract
Freshwater sulfide springs have extreme environmental conditions that only few vertebrate species can tolerate. These species often develop a series of morphological and molecular adaptations to cope with the challenges of life under the toxic and hypoxic conditions of sulfide springs. In this paper, we described a new fish species of the genus Jenynsia, Anablepidae, from a sulfide spring in Northwestern Argentina, the first in the family known from such extreme environment. Jenynsia sulfurica n. sp. is diagnosable by the lack of scales on the pre-pelvic area or the presence of a single row of scales, continuous or not, from the isthmus to the bases of the pelvic fins. Additionally, it presents a series of morphological and molecular characteristics that appear convergent with those seen in other fish species (e.g., Poeciliids) inhabiting sulfide springs. Most notably, J. sulfurica has an enlarged head and postorbital area compared to other fish of the genus and a prognathous lower jaw with a hypertrophied lip, thought to facilitate respiration at the air-water interface. Analyses of cox1 sequence showed that J. sulfurica has two unique mutations resulting in amino acid substitutions convergent to those seen in Poeciliids from sulfide springs and known to provide a physiological mechanism related to living in sulfide environments. A phylogenetic analysis, including molecular and morphological characters, placed J. sulfurica as sister taxa to J. alternimaculata, a species found in nearby, non-sulfide habitats directly connected to the sulfide springs. Thus, it can be inferred that the selection imposed by the presence of H2S has resulted in the divergence between these two species and has potentially served as a barrier to gene flow.

Diagnosis
The genus Jenynsia is subdivided into two subgenera, one containing five species only known from inland habitats in Brazil (Plesiojenynsia) and a more widely distributed subgenus including nine previously described species (Jenynsia). The new species herein described (Fig 1) presents the three synapomorphies considered by Ghedotti [1998] as diagnostic for the subgenus Jenynsia: (1) a modified sixth anal-fin ray segmented on its proximal quarter; (2) unsegmented on its distal quarter in adult males and (3) the vertically inclined proximal radials associated with the first six anal-fin rays in the gonopodium. Also, in the analyses under both, equal and implied weightings, the additional synapomorphies proposed by Aguilera et al. [2013] for the subgenus Jenynsia were recovered (i.e. character state 17–1; 47–1; 51–1 and 64–2; S1 Table). In the new species herein described, character 64 is reversed to state 0 (S1 Table).

The new species is diagnosable from all other species of the genus by the absence of scales on the ventral surface of the body or the presence of a single row of scales, continuous or not, from the isthmus to the pelvic-fin bases (vs. completely scaled ventral surface of body in all species of Jenynsia; Fig 3). Additionally, J. sulfurica presents a unique coloration pattern, exhibiting eight to eleven irregular blotches along the mid-lateral surface of the body. These are formed by dark-brown chromatophores, ranging from rounded spots to vertical bars spreading up to three scales in depth (vs. different configuration pattern; Fig 1).

Etymology: The specific epithet “sulfurica” is a Spanish adjective, meaning “related to sulfur or from the sulfur”. In this case refers to the environment rich in sulfur that this species inhabits.

Distribution: Jenynsia sulfurica is currently only known from Laguna La Quinta, which is part of a thermal system in the western flank of the Santa Bárbara hills, Santa Bárbara Department, Jujuy Province, Northwestern Argentina (Fig 5). It connects to the San Francisco River, tributary of the Bermejo River in the Paraná River basin. 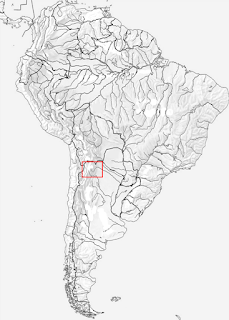 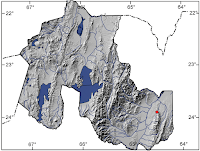 Conclusions:
So far, fishes of only four taxonomic families were known to have representatives in freshwater sulfide springs: Poeciliidae, Cyprinodontidae, Rivulidae (all Cyprinodontiformes), and Synbranchidae (Synbranchiformes). Moreover, only six of these species are endemic to sulfide springs (i.e., Cyprinodon bobmilleri, Aphanius ginaonis, Gambusia eurystoma, Limia sulphurophila, Poecilia sulphuraria, and P. thermalis). Jenynsia sulfurica is the first species of the genus Jenynsia, and the only species within Anablepidae currently known to inhabit sulfide springs, a very extreme freshwater environment. Moreover, Jenynsia sulfurica is the first microendemism within the genus, being present only in a small sulfide thermal spring in Northwestern Argentina.

Members of the order Cyprinodontiformes are in general highly tolerant to high temperatures, different concentrations of salinity, and a wide range of physicochemical environmental conditions, including environments with high concentrations of sulfide. In the genus Jenynsia, only a few studies were conducted to evaluate the tolerance of these fish to different environmental conditions, and almost all focused on J. lineata (= J. multidentata). This species is considered to be highly tolerant (e.g., euryhaline, eurythermic and euryoic), as it is commonly found to inhabit a wide range of abiotic conditions. Although there are no studies in the remaining species of the genus, it is possible that closely related species also show high tolerance to variation in different abiotic factors. This is in line with the pattern of diversity within the genus, where different species are found across drainages (i.e., in the absence of gene flow) rather than within drainages (i.e., in the presence of gene flow). Thus, Jenynsia sulfurica is, from an ecological and an evolutionary perspective, an interesting species that attests to the extreme conditions of H2S enriched environments. 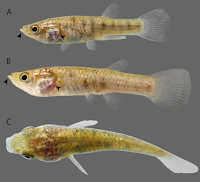