Abstract
The Old World leaf-nosed bats (Hipposideridae) are aerial and gleaning insectivores that occur throughout the Paleotropics. Both their taxonomic and phylogenetic histories are confused. Until recently, the family included genera now allocated to the Rhinonycteridae and was recognized as a subfamily of Rhinolophidae. Evidence that Hipposideridae diverged from both Rhinolophidae and Rhinonycteridae in the Eocene confirmed their family rank, but their intrafamilial relationships remain poorly resolved. We examined genetic variation in the Afrotropical hipposiderids Doryrhina, Hipposideros, and Macronycteris using relatively dense taxon-sampling throughout East Africa and neighboring regions. Variation in both mitochondrial (cyt-b) and four nuclear intron sequences (ACOX2, COPS, ROGDI, STAT5) were analyzed using both maximum likelihood and Bayesian inference methods. We used intron sequences and the lineage delimitation method BPP—a multilocus, multi-species coalescent approach—on supported mitochondrial clades to identify those acting as independent evolutionary lineages. The program StarBEAST was used on the intron sequences to produce a species tree of the sampled Afrotropical hipposiderids. All genetic analyses strongly support generic monophyly, with Doryrhina and Macronycteris as Afrotropical sister genera distinct from a Paleotropical Hipposideros; mitochondrial analyses interpose the genera Aselliscus, Coelops, and Asellia between these clades. Mitochondrial analyses also suggest at least two separate colonizations of Africa by Asian groups of Hipposideros, but the actual number and direction of faunal interchanges will hinge on placement of the unsampled African-Arabian species H. megalotis. Mitochondrial sequences further identify a large number of geographically structured clades within species of all three genera. However, in sharp contrast to this pattern, the four nuclear introns fail to distinguish many of these groups and their geographic structuring disappears. Various distinctive mitochondrial clades are consolidated in the intron-based gene trees and delimitation analyses, calling into question their evolutionary independence or else indicating their very recent divergence. At the same time, there is now compelling genetic evidence in both mitochondrial and nuclear sequences for several additional unnamed species among the Afrotropical Hipposideros. Conflicting appraisals of differentiation among the Afrotropical hipposiderids based on mitochondrial and nuclear loci must be adjudicated by large-scale integrative analyses of echolocation calls, quantitative morphology, and geometric morphometrics. Integrative analyses will also help to resolve the challenging taxonomic issues posed by the diversification of the many lineages associated with H. caffer and H. ruber. 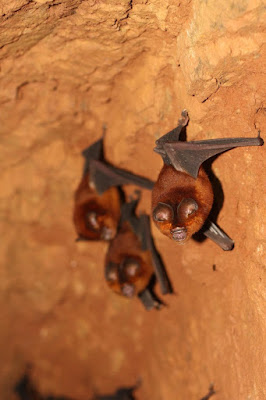 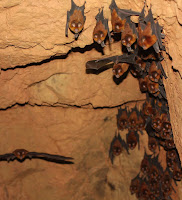 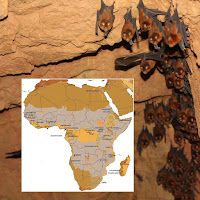