Abstract
We studied the genetic variability of Platypelis species (Anura: Microhylidae) with red fash marks from Madagascar based on mitochondrial (16S rRNA) and nuclear (RAG1) genes. Our molecular phylogenetic results suggest that the red colour evolved independently in the Platypelis barbouri complex and P. milloti and confrm the validity of a long-known but still undescribed new species from eastern Madagascar. Platypelis ranjomena sp. nov. is distinctly coloured with dark red to purple patches at the base of the forelimbs, in the inguinal region, and on the ventral parts of the hind limbs. It differs from most other arboreal cophylines by this red colour and from its sister species P. barbouri by smooth dorsal skin texture, iris colour, bioacoustics (much longer note duration in advertisement calls), and genetics (strong differences in mitochondrial and nuclear markers). The new species is widespread at low elevations along the east coast from Marojejy in the north to Manombo in the south. However, genetic evidence indicates substantial intraspecifc variability among populations, suggesting that the taxonomy of P. ranjomena and the other species in this complex is still incompletely resolved. An individual of P. barbouri from Mahasoa shared a nuclear allele with P. ranjomena, and its call was to some degree intermediate between these species, suggesting a possible case of hybridization in an area that we hypothesize could be a contact zone between the two species. Individuals from Madagascar’s northeast hitherto assigned to P. barbouri represent a lineage that is sister to the clade of P. barbouri + P. ranjomena. It is herein identifed as a new candidate species (Platypelis sp. Ca11), which occurs in syntopy with P. ranjomena. 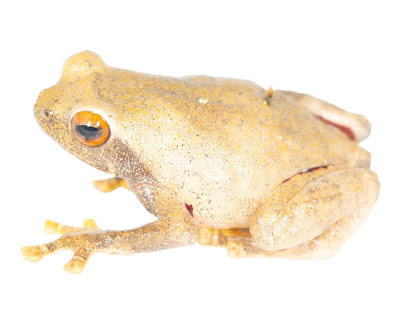 Etymology: The specifc epithet is derived from the Malagasy words ‘ranjo’ (= leg) and ‘mena’ (= red). It is used as a noun in the nominative singular, standing in apposition to the generic name.

Distribution: The distribution based on genetically confrmed locality records is shown in Figure 2 and indicates that the species is widespread in the lowlands of eastern and north-eastern Madagascar. Additional unconfrmed locality records based on photographs and non-sequenced voucher specimens include the coast of Masoala (near ‘Eco-Lodge chez Arol’, ..., ca. 21 m a.s.l.), Ambodiriana (...), and near Analalava (..., ca. 30 m a.s.l.) close to Foulpointe (= Mahavelona). The Manombo population deserves further study as it may represent a deep conspecifc lineage or (less likely) a more divergent form.

Available names: Several junior synonyms in the genus Platypelis must be excluded as available names for P. ranjomena. Platyhyla verrucosa Mocquard, 1901 and Platyhyla voeltzkowi Boettger, 1913 (both junior synonyms of P. grandis according to Noble & Parker, 1926) are larger, have a granular dorsal skin and completely lack any red ventral colour; Cophyla tuberculata Ahl, 1929, considered a further synonym of P. grandis based on the comparison of juveniles (Blommers-Schlösser & Blanc, 1991), has granular skin and differs in colour pattern (Ahl, 1929); Paracophyla tuberculata Millot & Guibé, 1951, currently considered a junior synonym of P. barbouri (Blommers-Schlösser & Blanc, 1991), has a similar dorsal pattern to P. ranjomena (see Guibé, 1978: Fig. 348) and no vomerine teeth but is very small (SVL 17 mm) and has distinct dorsal tubercles, which are absent in P. ranjomena. The holotype of Platypelis barbouri is a gravid female of 20 mm SVL with large ovary eggs of 1.5 mm diameter and rugose skin (Noble, 1940) and thus smaller and more rough-skinned than P. ranjomena.

New candidate species: (Platypelis sp. Ca11) Our genetic analysis revealed a deep new lineage in this species group that was not previously recognised (Fig. 1): specimens hitherto assigned to P. barbouri from Marojejy closely resemble that species and in fact represent a lineage that is sister to the P. barbouri + P. ranjomena clade, herein named P. sp. Ca11 (Fig. 8). This lineage also occurs in Ambolokopatrika, and at Ambodivoangy in syntopy with P. ranjomena (Figs 1–2). We are confident that the assignment of the name P. barbouri should be attributed to the southern lineage, as the type locality of Fanovana Forest is located close to Andasibe in central eastern Madagascar. This therefore represents a new candidate species that should be taxonomically investigated in the future; we have here refrained from doing so, as insufficient material was available to us for examination. 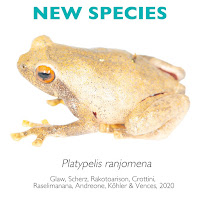 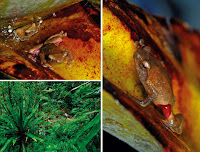