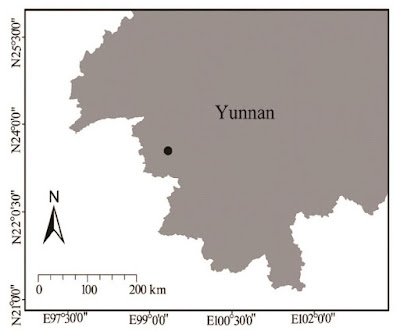 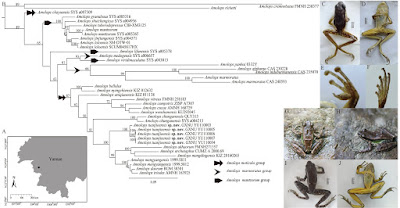 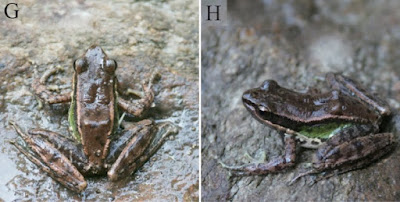 Distribution and ecology: The new species is known only from the type locality (Supplementary Figure S1). The holotype and paratypes were found on leaves and small branches, less than 1 m above the ground along a stream. No tadpoles or vocal recordings were collected for the new species.


Comments:
In China, species of Amolops have been assigned to different species groups based on morphological characters (Fei et al., 2009). However, consistent with Lyu et al. (2019a), our phylogenetic analysis revealed that the division of some species groups needs further investigation. Firstly, A. chayuensis, which was placed in the A. monticola group by Sun et al. (2013) based on the presence of dorsolateral folds, did not group together with the clade consisting of the new species and other members of the same group, indicating that the A. monticola group is not monophyletic and that assignment of species groups based on dorsolateral folds only is problematic. Comprehensive morphological and molecular comparisons using A. monticola data are necessary to clarify the division of the A. monticola group.

In addition to the problems at the species group level in Amolops, species diversity within this genus also needs further investigation. Amolops marmoratus, which has been confused with A. afghanus and A. indoburmanensis (Dever et al., 2012; Lyu et al., 2019a), is mainly distributed in southern Tibet, as well as Myanmar, Bangladesh, Nepal, and eastern Himalaya in India (Frost, 2019), with distribution in Thailand according to Chan-ard (2003). This species is certainly known from Myanmar, but the statuses of other populations remain problematic (Frost, 2019). In this study, we found that the genetic distance between A. marmoratus from Thailand and A. marmoratus from Myanmar reached 4.48% for the 16S sequences, indicating that A. marmoratus from Thailand possibly represents a cryptic species.