Abstract
This study describes a new species of the genus Leptobrachella, Leptobrachella suiyangensis sp. nov. from the Huoqiuba Nature Reserve, Suiyang County, Guizhou Province, China, based on morphological data and phylogenetic analyses (16S rRNA mtDNA). The new species can be distinguished from other congeners by the molecular divergence and by a combination of morphological characters, including body size, dorsal and ventral patterns, dorsal skin texture, size of the pectoral and femoral glands, degree of webbing and fringing on the toes and fingers, dorsum coloration, and iris coloration in life. Currently, the genus Leptobrachella contains 75 species, 21 of which are found in China, including seven species reported from Guizhou Province. The uncorrected sequence divergence percentage between Leptobrachella suiyangensis sp. nov. and all homologous DNA sequences available for the 16S rRNA gene was found to be >4.7%. The new record of the species and its relationships with others in the same genus imply that species distribution, habitat variation, environmental adaptation, and diversity of the genus Leptobrachella in southwest China need to be further investigated.

Etymology: The specific epithet “suiyangensis” refers to the name of the holotype locality, Taibai Town in Suiyang County of Guizohu Province, China.
We suggest as its English name “Suiyang Leaf-litter Toad,” and its Chinese name as “Sui Yang Zhang Tu Chan (绥阳掌突蟾)”.

Distribution and habitats: Currently, Leptobrachella suiyangensis sp. nov. is known only from its holotype locality, Huoqiuba Nature Reserve, Suiyang County, Guizhou Province, China (Fig. 1). The specimens were collected in a stream (ca 1.5 m in width and ca 10 cm in depth) and from nearby well-preserved bamboo forests (1501 m a.s.l.). During June, males were calling from under bamboo leaves; others perch on or under rocks by the side of the stream. 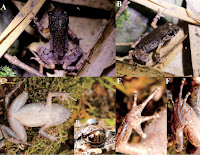 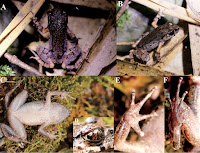 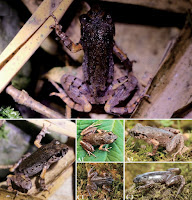 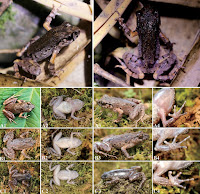