Abstract
The geological and paleoenvironmental setting and the vertebrate taxonomy of the fossiliferous, Cenomanian-age deltaic sediments in eastern Morocco, generally referred to as the “Kem Kem beds”, are reviewed. These strata are recognized here as the Kem Kem Group, which is composed of the lower Gara Sbaa and upper Douira formations. Both formations have yielded a similar fossil vertebrate assemblage of predominantly isolated elements pertaining to cartilaginous and bony fishes, turtles, crocodyliforms, pterosaurs, and dinosaurs, as well as invertebrate, plant, and trace fossils. These fossils, now in collections around the world, are reviewed and tabulated. The Kem Kem vertebrate fauna is biased toward large-bodied carnivores including at least four large-bodied non-avian theropods (an abelisaurid, Spinosaurus, Carcharodontosaurus, and Deltadromeus), several large-bodied pterosaurs, and several large crocodyliforms. No comparable modern terrestrial ecosystem exists with similar bias toward large-bodied carnivores. The Kem Kem vertebrate assemblage, currently the best documented association just prior to the onset of the Cenomanian-Turonian marine transgression, captures the taxonomic diversity of a widespread northern African fauna better than any other contemporary assemblage from elsewhere in Africa.

Conclusions:
Kem Kem paleoenvironments
Kem Kem Group formations are envisioned as the headland of a vast river system feeding north to a prograding delta laid down on the Kem Kem embayment (Guiraud et al. 2005, Fig. 33). The sequence begins with conglomeratic beds deposited in anastomosing channels on weathered Paleozoic strata (Fig. 32, stage 1). Prograding delta sediments of the Gara Sbaa Formation, (Fig. 32, stage 2) give way to coastal deposits and sabkas of the Douira Formation (Fig. 32, stage 3), which are suddenly overrun by a marine transgression of the Akrabou Formation (Fig. 32, stage 4). The Gara Sbaa and Douira formations, thus, capture the transition, likely in the Early and Middle Cenomanian, from fluvial-deltaic to lower-energy coastal, pond and sabkha paleoenvironments.

The Kem Kem delta was dominated by rapidly moving (lotic) paleoenvironments with water flowing toward the open ocean and much rarer still water (lentic) paleoenvironments such as ponds (Oum Tkout locality). In the dominant lotic paleoenvironments, there is evidence for both freshwater and brackish conditions; some of the recovered fauna (e.g., dipnoans) prefer freshwater habitats whereas others (e.g., lamnifom sharks) prefer brackish conditions. Some aquatic genera, such as Onchopristis or Axelrodichthys may have been adapted to both freshwater and marine paleoenvironments. In the upper portion of the Gara Sbaa Formation and the Douira Formation, tidal indicators suggest brackish conditions may have predominated as the transgression continued. Hothouse conditions characterized by harsh seasonality, periodic aridity and elevated sea-surface temperatures likely prevailed during deposition of Kem Kem Group rocks and comparable deposits along the northern shore of Africa (Wendler and Wendler 2016).

Most vertebrate fossils are isolated either in laminar cross-bedded sandstones or in channel lag deposits. Only two partial articulated vertebrate skeletons have been recovered in the formation, both from the uppermost portion of the section. The first is a partial skeleton of the diplodocoid sauropod Rebbachisaurus garasbae (Fig. 104; Lavocat 1951, Wilson and Allain 2015), and the second is the partial skeleton of the enigmatic theropod Deltadromeus agilis (Figs 115–118; Sereno et al. 1996).

Douira Formation, a coastal mudflat. The first significant mudstone bed identifies the base of the lower-energy Douira Formation, which is composed of finer-grained strata that often exhibit tidal influences. Sandstones are more common near the base of the formation, giving way to ledge-forming Siltstone, mudstone, claystone and thin gypsiferous evaporites. Douira beds, like those in the Gara Sbaa Formation, are predominantly red-hued rocks that fine upward as well as northward along the outcrop toward the mouth of the delta.

Mudstones and claystones dominate Douira beds and are characterized by mottling, slickensides, and blocky to crumbly textures with rare calcitic nodules, gypsum crystals, root traces and burrows. Whereas a thin (1 cm) gypsum horizon occurs just below a calcareous mudstone, evaporite deposits of similar lithology are thicker and more common in Kem Kem Group rocks to the west and north of the Kem Kem embayment.

Two other features of the Douira Formation are noteworthy. A freshwater pond deposit, Oum Tkout, is located low in the section halfway along the south-north axis of outcrops on the delta (Fig. 9, locality 6). Its laminated clays preserve a spectacular array of hard and soft-bodied vertebrates, nonvertebrates, and plants (e.g., Dutheil 1999a, 1999b). The second feature, high in the section, are footprint horizons that record, at times with high fidelity and remarkable depth, dinosaur tracks and other ichnological traces (Sereno et al. 1996, Ibrahim et al. 2014a).

The lower portion of the Douira Formation has yielded associated remains of vertebrates, including a partial shell of the pleurodire turtle Galianemys sp., a partial skeleton of Spinosaurus aegyptiacus (Ibrahim et al. 2014b), and a partial skull of Carcharodontosaurus saharicus (Figs 72, 129, 133–137; Sereno et al. 1996).

In most Mesozoic terrestrial assemblages, only one or two large-bodied theropod genera are present. Tyrannosaurus rex, for example, may be the only large-bodied predator in the Late Cretaceous (Maastrichtian) habitats on Laramidia (Horner et al. 2011), whereas Tarbosaurus and the longer-snouted Alioramus may have co-occurred in Asia during the same interval (Brusatte and Carr 2016). Three large-bodied predators (Ceratosaurus, Torvosaurus and Allosaurus) have been recorded in the Late Jurassic (Kimmeridgian-Tithonian) Morrison Formation of western North America. Marked differences between these predators in skull architecture and tooth size and shape suggest marked differences in feeding (Henderson 1998), and only one of the triumvirates (Allosaurus) is present and abundant at many sites.

Two additional features set apart the Kem Kem and Bahariya predators and their faunas, in addition to the overabundance of large-bodied dinosaurian predators. First, at least three of the four large-bodied predators present in both the Kem Kem and Bahariya assemblages are among the largest (top 10%) dinosaurian predators on record. Maximum adult body size for Carcharodontosaurus and Spinosaurus is based on Kem Kem specimens (Sereno et al. 1996, Dal Sasso et al. 2005), and both genera are widely appreciated as > 12 m long “giants”. The largest specimen of Deltadromeus is a femur from the Bahariya Formation (Stromer 1934). Destruction of the original Bahariyan material has resulted in little notice of the size of the femur now attributed to Deltadromeus (Sereno et al. 1996). With a femoral length of 122 cm (Stromer 1934), the femur is 165% greater than the length of that of the immature holotypic specimen of Deltadromeus from the Gara Sbaa Formation (Fig. 118B). The Egyptian femur is 91% the length of the femur in Tyrannosaurus at maximum adult body size (Brochu 2003). Thus, not only are there four large-bodied predators in the Kem Kem and Bahariya assemblages, three are among the largest land predators known.

Second, large-bodied herbivores are neither diverse nor abundant. Only three large bodied herbivores have been recovered as diagnostic body fossils in the Kem Kem and Bahariya assemblages, the rebbachisaurid Rebbachisaurus garasbae from the Gara Sbaa Formation (Lavocat 1954, Wilson and Allain 2015) and the titanosaurians Paralititan stromeri and Aegyptosaurus baharijensis (Smith et al. 2001) from the Bahariya Formation. The companion titanosaurian in the Kem Kem Group (Ibrahim et al. 2016) and rebbachisaurid in the Bahariya Formation (Stromer 1932) are known only from fragmentary material. Additionally, there is a single footprint of a large iguanodontian in the Douira Formation (Sereno et al. 1996, Ibrahim et al. 2014a). Thus, large-bodied herbivores likely co-occurred with the four large-bodied predators in the Kem Kem assemblage, but they are not as diverse as in many other Cretaceous formations nor particularly common as fossils.

Signature Cretaceous fauna, northern Africa. The Kem Kem assemblage is dominated by aquatic and subaquatic nonvertebrates and vertebrates (~85%, ~40 species), nearly all of which are predators (Table 8). Most of the described vertebrates, with the exception of some of the pterosaurs and dinosaurs, lived exclusively or predominantly within an aquatic setting, which would include pond, river, delta, and nearshore habitats. Most of the taxa in the assemblage, thus, are predators utilizing aquatic food resources as in modern marine food webs (Friedlander et al. 2012).

Co-occurrence of a trio of large-bodied theropod predators, an abelisaurid, spinosaurid and carcharodontosaurid, characterizes faunas of northern Africa for a duration of at least 20 Ma from the middle (Aptian-Albian) to early Late Cretaceous (Cenomanian) time (Sereno and Brusatte 2008, Fanti et al. 2014). Because the fossil record before and after this interval is poorly represented on Africa, 20 Ma is the minimum duration for this ecological guild (Simberloff and Dayan 1991) of large-bodied predators.

The earliest record of this trio is approximately 115 Ma in the Aptian-Albian Elrhaz Formation of Niger. The spinosaurid Suchomimus (Sereno et al. 1998) is the best known and most abundant compared to the rare (single) bone records of the abelisaurid Kryptops and carcharodontosaurid Eocarcharia (Sereno and Brusatte 2008). In skull shape and tooth form, these three predators are strongly divergent. Suchomimus has an extremely long skull and specialized dentition with an ensnaring premaxillary terminal rosette; Kryptops has a very short skull with small recurved teeth of similar size; Eocarcharia had a skull of intermediate length and more typical tetanurine shape with recurved, blade-shaped teeth that reach maximum size near the front of the maxilla. From these cranial and dental specializations, we infer that the dominant mode of feeding may have been fish-eating, scavenging, and macropredaceous hunting, respectively.

Fanti et al. (2014) suggested that there may be paleoecological separation of spinosaurids from abelisaurids and carcharodontosaurids based on the predominance of spinosaurid teeth in estuarine deposits (Oum ed Diab Member) versus the presence of all three in underlying channel deposits (Chenini Member and basal reworked unit of the Oum ed Diab Member). We regard such conclusions, based solely on isolated transported teeth in a crocodylomorph-dominated assemblage, to be poorly supported. We never found such paleoecological separation among this trio of predators in either formation in the Kem Kem Group nor in the Elrhaz or Echkar formations in Niger. The Elrhaz Formation, which is composed almost exclusively of fluvial cross-bedded sandstones distant from any marine margin, would be regarded as more terrestrial than the overlying Echkar Formation and either of the formations in the Kem Kem Group. Yet, Suchomimus is clearly the most abundant large-bodied theropod in the Elrhaz Formation, based on isolated remains and several partial articulated skeletons. That surprising circumstance underscores the ecological flexibility, noncompetitive nature, and robustness of this ecological guild of predators, which thrived for at least 20 Ма, despite varying local habitats and environmental conditions. In Niger, as best as can be discerned in the field in both the Elrhaz and Echkar formations, this trio seem to co-occur during the entire transgressive sequence from inland to nearshore habitats.

Three other aspects of the Elrhaz fauna are also present in the younger Kem Kem and Bahariya faunas. First, large-bodied herbivores include iguanodontian ornithischians and two ecologically distinct sauropods (a rebbachisaurid and titanosaurian). In both faunas, thus, large herbivores remain a mixture of ornithopods and macronarian sauropods, which is not always the case on other landmasses during the Late Cretaceous.

Second, crocodylomorphs are very diverse and include at least one giant form with a skull length approaching 2 m. In the Elrhaz Formation, that crocodylomorph giant is Sarcosuchus (Sereno et al. 2001), which has been reported as far north as Tunisia (Dridi 2018). In both the Echkar Formation in Niger and the Kem Kem Group, an unnamed genus with skull size nearly equaling Sarcosuchus is present (Larsson et al. 2015). Likewise, in the Bahariya Formation of Egypt, the skull of the unusual sit-and-wait predator Stomatosuchus also approaches 2 m in length (Stromer 1925, 1936, Sereno and Larsson 2009).

Finally, mammals and birds are conspicuously absent or very rare in the Aptian-Albian Elrhaz Formation and in the younger (Cenomanian) Echkar, Kem Kem, and Bahariya faunas, although tracks of both groups were recently reported in the Cenomanian-age Zebbag Formation of southern Tunisia (Contessi and Fanti 2012; Contessi 2013). Mammals have been recorded in Early Cretaceous rocks of northern Africa (Sigogneau-Russell 1995, Heinrich 1998), so their rarity in formations of Aptian-Cenomanian age across northern Africa, which include fluvial and pond settings that have been extensively sampled and screen-washed, is notable and contrasts markedly with the record of these two groups from similar age Cretaceous deposits on northern landmasses. 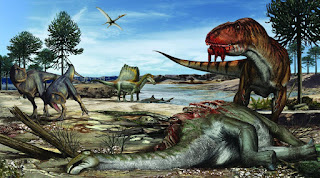 Paleontologists reveal 'the most dangerous place in the history of planet Earth'  eurekalert.org/pub_releases/2020-04/uop-pr042420.php 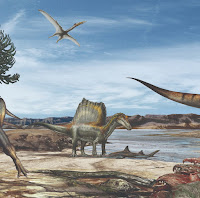 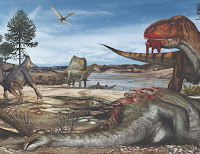