ABSTRACT
Few studies have focused on the diverse fauna of southwestern Brazilian Amazonia. This region, spared from large-scale human occupation until the second half of the twentieth century, has been threatened by expanding agriculture, logging, and mining. Here, we describe a new nurse frog (Allobates, Aromobatidae) from the open highland habitats of Serra dos Pacaás Novos, one of the few large remnants of relatively intact native vegetation in the Brazilian state of Rondônia. The new species is diagnosed by its metallic orange dorsal colouration, weakly expanded discs on hands, and presence of two subarticular tubercles on Finger IV. A phylogenetic analysis based on DNA sequence data recovered the new species as more closely related to nurse frogs from the Madeira and Tapajós River basins; this pattern may reflect a history of dispersal uphill from a lowland ancestor. Our results also indicate that the generic assignment of Allobates alessandroi (Grant and Rodriguez, 2001), a high-elevation species from the Andes of Peru, needs to be reassessed; we discuss the phylogenetic affinities of this species based on morphological attributes. 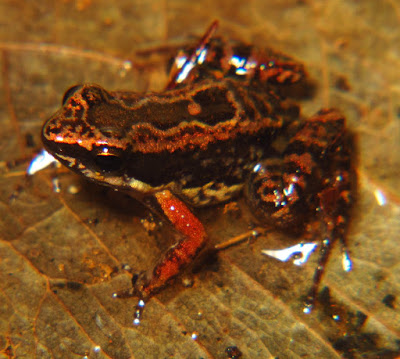 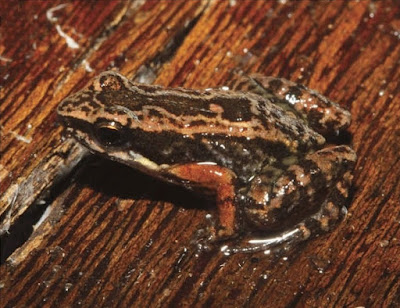 Etymology. Allobates pacaas is named in recognition of an important natural refuge in the Brazilian state of Rondônia. The region has experienced intense deforestation since the 1960s with large-scale loss of biodiversity (Fearnside 1987). The specific epithet is a noun in apposition to the genus. 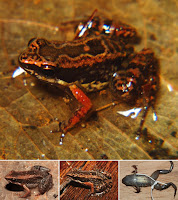