Abstract
We describe two new cryptic species of Bufo within the subgenus Anaxyrus discovered in Central Nevada of the western United States. Our analyses revealed that these two localized endemic toads are genetically divergent and morphologically distinct, yet were concealed under the range of the broadly distributed western toad (Bufo boreas), which occurs throughout Nevada. The newly discovered species are close in geographic proximity to each other (albeit, in different hydrological basins) but have evolved unique morphological characters that are distinct from each other and distinctive from all allied taxa within the B. boreas species complex. The delimiting of these two rare toads emphasizes the link between taxonomic crypsis and inadequate conservation as these newly described species are vulnerable to extinction due to severely restricted geographic ranges, unknown population sizes, and dependency on rare, fragile wetland habitat, which is a limited resource within Nevada, the primary state that makes up the arid Great Basin. These two endemics join the Great Basin B. boreas species complex as imperiled new members, and our study demonstrates that our knowledge of anuran diversity is incomplete and that new discoveries can still be made, even in unlikely settings. 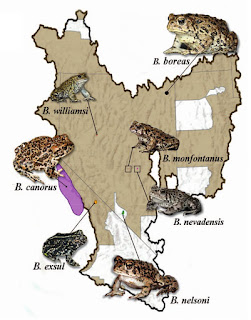 Diagnosis.—Bufo (Anaxyrus) nevadensis is a member of the Great Basin B. boreas species complex (Blair, 1972), but traditionally has been identified as B. boreas due to its occurrence within the Western Toad's geographic range, yet is distinct from B. boreas by a combination of morphological characters (Figs. 2, 6, Tables 1, 4), genetic evidence (Figs. 3, 4, Table 5), and restricted geographic distribution (Fig. 5B). Bufo nevadensis is distinguished from B. boreas due to its small adult body size (SVL is approximately 2 cm smaller than B. boreas; Tables 1, 4); significantly, but modestly longer head with a relatively shorter snout; well-separated, perceptibly short and narrow parotoid glands; significantly, but comparatively long legs, large hind feet (Fig. 6B); and distinctive mottling of venter (Fig. 6B, D).
...

Etymology.—The species name is a derivative from the state of Nevada (U.S.A) where this rare toad occurs and pays homage to the unique biodiversity found in the desert landscape of its home state.

Diagnosis.—Bufo (Anaxyrus) monfontanus occurs within the range of B. boreas but is distinct from the Western Toad by a combination of diagnostic morphological characters (Figs. 2, 7, Tables 1, 4), genetic evidence (Fig. 3, Table 5), and restricted geographic distribution (Fig. 5B). Bufo monfontanus is distinguishable from B. boreas by having a small adult body size (SVL is 2 cm smaller than B. boreas; Tables 1, 5); significantly, but modestly shorter head; perceptibly large, parotoid glands; significantly, but comparatively shorter legs with small hind feet; and weakly warted body (Fig. 7A).
...

Etymology.—The species name monfontanus (from the Latin “mons” for mountain and Latin “fons,” a spring or fountain) is descriptive of the high-elevation spring habitat where this toad occurs and pays tribute to the nature of the rare spring habitat and the biodiversity relying on this important resource within the Nevada. 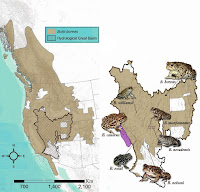 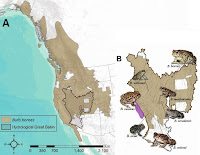