Abstract
Reptiles are still being described worldwide at a pace of hundreds of species a year. While many discoveries are from remote tropical areas, biodiverse arid regions still harbor many novel taxa. Here, we present an updated phylogeny of colubrid snakes from the Western Palearctic by analyzing a supermatrix of all available global snake species with molecular data and report on the discovery of a new genus and species of colubrine snake from southeastern Iran. The new taxon, named Persiophis fahimii gen. et sp. nov., is nested within a clade containing Middle Eastern and South Asian ground racers (Lytorhynchus, Rhynchocalamus, Wallaceophis, and Wallophis). This species has a derived morphology including an edentulous pterygoid and occurrence of short and blunt teeth on the palatine, maxillae and dentary bones, an elongated snout and a relatively trihedral first supralabial scale that is slightly bigger than the second, and elongated toward the tip of rostral. We also report on the osteology and phylogenetic placement of several poorly studied colubrines: Hierophis andreanus (reassigned to Dolichophis) and Muhtarophis barani.

Diagnosis: For the genus and species, Persiophis fahimii is distinguished within the subfamily Colubrinae by a combination of distinct osteological characters, including the occurrence of vestigial teeth on the palatine; a thin, edentulous pterygoid; short and blunt teeth on the maxillae and dentary, occurrence of edentulous parts on the anterior and middle region of the maxillae; a fully fused basioccipital and basisphenoid; the occurrence of a highly oblique quadrate bone attached to the posterior tip of a somewhat elongated supratemporal. The genus and species are also distinguished within the subfamily Colubrinae by a combination of morphological characters, including an elongated snout; occurrence of a rostral scale that is visible from above and wedged between the internasals; a relatively trihedral first supralabial that is slightly bigger than the second and elongated toward the tip of rostral; 15 longitudinal rows of dorsal scales on midbody; and an edentulous pterygoid. 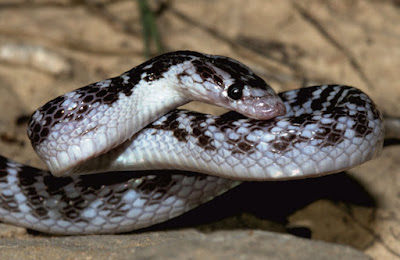 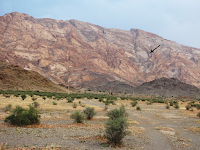 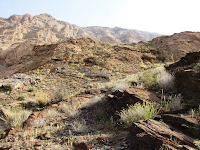 Natural history: Our data on biology of Persiophis fahimii is based on the one specimen collected. The holotype was collected at elevation of 1,350 m ASL on a bare mountainside, while climbing on a vertical rocky wall, at late night (2.30 AM). The mountain is composed of Devonian limestone marbles, at the southeastern edge of the central mountains of Iran, ranging from 1,050 to 1,600 m ASL. Dominant vegetation on the plain in front of the mountain is Calligonum and annual forbs and grasses. At the base of the mountain, the vegetation changes to Calligonum and Ziziphus nummularia. At the type locality, the vegetation is dominated by sparse woody, thorny or aromatic shrubs, including Periploca sp. (Apocynaceae), Dichanthium sp. (Poaceae), Fagonia sp. (Zygophyllaceae), Ephedra foliata (Ephedraceae), Teucrium sp. (Lamiaceae), Lophochloa sp. (Poaceae), Lycium sp. (Solanaceae), Tribulus sp. (Zygophyllaceae), Pulicaria sp. (Asteraceae), Reseda sp. (Resedaceae), Heliotropium sp. (Boraginaceae), Gymnocarpos decander (Caryophyllaceae), Convolvulus sp. (Convolvulaceae), Heliantemum sp. (Cistaceae), and Diceratella persica (Apiaceae).

Etymology: The genus name is a latinized noun in masculine gender derived from the Greek words “Persi-” (Persís) = Persia (old name of Iran) and “ophis” = serpent. The species is named after Dr. Hadi Fahimi, a young naturalist and herpetologist who dedicated his life to studying the biodiversity and conservation of reptiles and mammals of Iran. As a young nature lover, Hadi joined the rangers of the Department of Environment in Kerman province for two years and served partly in Khabr National Park where is close to the type locality of Persiophis fahimii. He was a Ph.D. student in IAU, Tehran, studying on the conservation of black bears in southeastern Iran, but sadly passed away in an aircraft crash in Dena Mountain in central Zagros in February 2018. We suggest the common name “Fahimi’s Ground Snake” in English for the new species.

Conclusions:
Here, we present new molecular sequence data and a new phylogenetic analysis of snakes, focusing primarily on Colubrinae from southwestern Asia. We find continued uncertainty in the placement of the enigmatic Turkish genus Muhtarophis based on osteological comparisons, despite strong support in the phylogenetic analysis. On the basis of the tree and morphology, we confidently reassign Hierophis andreanus from Hierophis to Dolichophis, hereafter referred to Dolichophis andreanus. Our morphological and molecular data also suggest a potential instance of convergent miniaturization in these Old-World racers. Finally, we report on the discovery of a new genus and species of ground snake, Persiophis fahimii, from southeastern Iran. Our data highlight the importance of broad phylogenetic sampling and ground-level field research to gather an accurate picture of global biodiversity, phylogenetic relationships, and evolutionary patterns in groups such as snakes. 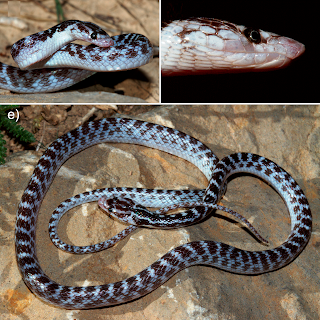 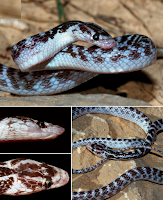 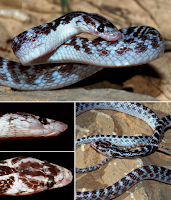