Abstract
After the Permo-Triassic mass extinction, the archosauromorph fossil record is comparatively abundant and ecologically diverse. Among early archosauromorphs, tanystropheids gained considerable attention due to the presence of extreme skeletal adaptations in response to sometimes overspecialized lifestyles. The origin and early radiation of Tanystropheidae, however, remains elusive. Here, a new Early Triassic archosauromorph is described and phylogenetically recovered as the sister-taxon of Tanystropheidae. The new specimen, considered a new genus and species, comprises a complete posterior limb articulated with pelvic elements. It was recovered from the Sanga do Cabral Formation (Sanga do Cabral Supersequence, Lower Triassic of the Paraná Basin, Southern Brazil), which has already yielded a typical Early Triassic vertebrate assemblage of temnospondyls, procolophonoids, and scarce archosauromorph remains. This new taxon provides insights on the early diversification of tanystropheids and represents further evidence for a premature wide geographical distribution of this clade. The morphology of the new specimen is consistent with a terrestrial lifestyle, suggesting that this condition was plesiomorphic for Tanystropheidae.

Etymology: Genus named after Elessar, meaning ‘elf-stone’ in the fictional language Quenya, created by J. R. R. Tolkien. In Tolkien’s Middle Earth universe, Elessar Telcontar is the name chosen by king Aragorn II, who, by his turn, is also known as Strider or ‘longshanks’. The comparatively long zeugopodium of UFSM 11471 makes it a long-shanked animal, justifying the name. Termination -saurus from Greek, meaning ‘lizard’. Species name derived from the supercontinent Gondwana and the Latin adjective occidens, ‘from west’, in a reference to the locality from where the new species was recovered.

Diagnosis: Elessaurus gondwanoccidens differs from all other archosauromorphs based upon a unique combination of characters: second sacral vertebral rib elongated and distally bifurcated, with a robust articular surface; transverse processes of the caudal vertebrae inclined posterodorsally; strongly sigmoidal femur; tibia and fibula longer than femur; metatarsals increase in size from the first to the fourth toe; fifth metatarsal short, with a proximal hook-shaped end; presence of a calcaneal tuber.

Locality and horizon: The specimen was collected at the locality known as Bica São Tomé, Sanga do Cabral Formation (Sanga do Cabral Supersequence, Paraná Basin), municipality of São Francisco de Assis, Rio Grande do Sul, Southern Brazil (Fig 1). Elessaurus gondwanoccidens was collected in one of the five outcrops comprising the Bica São Tomé (outcrop 5 of Da-Rosa et al. [2009]). An Induan-Olenekian age (251–247 Ma) [Cohen et al 2013.] is inferred for this formation based on the presence of the parareptile Procolophon trigoniceps Owen, 1876, and comparisons with the Lystrosaurus Assemblage Zone of the South African Karoo Basin. Elessaurus gondwanoccidens represents the most complete postcranial skeleton so far recovered from this unit, as Sanga do Cabral fossils are often fragmentary, with rare occurrences of associated elements.

Description and comparison:
Elessaurus gondwanoccidens holotype is composed of an almost complete hindlimb associated with pelvic girdle bones and partially articulated sacral and caudal vertebrae (Fig 2). Although some elements show signs of compression (e.g. femur, tibia), all bones are close to a natural position, except for a slight displacement of some tarsal elements and distal phalanges missing in most digits. As will be discussed, the specimen is morphologically compatible with basal archosauromorphs, especially with Tanystropheidae.
.... 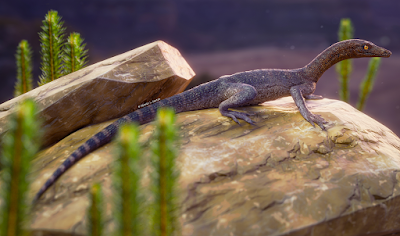 Conclusions:
Until recently, the Sanga do Cabral Formation provided only few remains assigned to Archosauromorpha indet. Now, at least two independent lineages were reported for this unit. Although rare, these fossils demonstrate that archosauromorphs had already diversified in the Early Triassic of western Gondwana. Elessaurus gondwanoccidens is here recovered as the sister taxon of Tanystropheidae and was collected from rocks reminiscent of continental environments dominated by ephemerous water bodies. Most representatives of Tanystropheidae (e.g. Tanystropheus) belong to marine environments. The results of the present work suggest that a terrestrial mode of life was plesiomorphic for Tanystropheidae and maintained by some of its representatives (e.g. Macrocnemus). The record of Tanystropheidae-related taxa in Permian and Lower Triassic layers from South America indicates a premature wide distribution of this clade, with a possible Gondwanan origin.