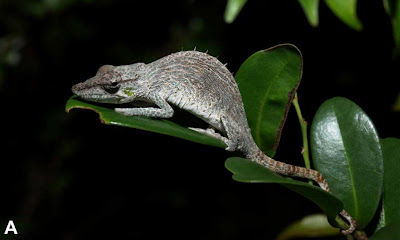 Calumma vohibola sp. nov. (Male, Holotype)
at the type locality in the Vohibola forest
Abstract
We describe Calumma vohibola sp. nov., a morphologically distinct chameleon
species of the Calumma nasutum species group from littoral forest fragments of the northcentral east coast of Madagascar. Males and females of this species differ from all other species of the Calumma nasutum group by an almost absent rostral appendage, by a
characteristic stress colouration in the female consisting of a dark reddish ground colouration with many irregular light blue spots, and by significant sequence divergence in the mitochondrial ND2 gene (10.5 19.4% pairwise distance) and no haplotype sharing in the nuclear C-mos gene compared with other members of the C. nasutum group. A molecular survey of C. nasutumpopulations occurring near the type locality of the new species reveals an extraordinarily high genetic diversity within this morphologically conservative chameleon group. We suspect that C. vohibola might be restricted to a rather small and fragmented distribution range within the last littoral forest fragments along the coast. Owing to the unsolved taxonomic situation of the C. nasutum group, no reliable distribution data of any member of this group are available at present, and hence we cannot ascertain whether the extent of occurrence of C. vohibola is indeed as restricted as suspected. Intensive surveys and field studies are necessary to clarify the distribution limits of this new species and to assess its conservation status reliably.
Key words: Chamaeleonidae, Calumma vohibola, Calumma nasutum, new species, genetic diversity, littoral forest 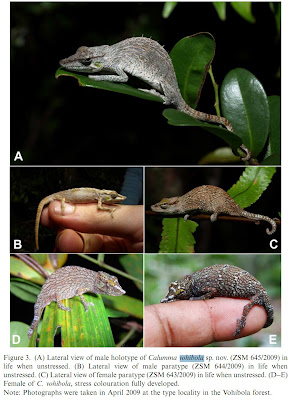 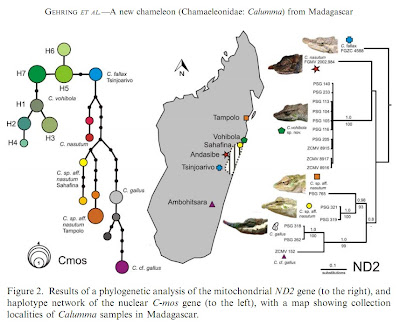 Figure 2. Results of a phylogenetic analysis of the mitochondrial ND2 gene (to the right), and haplotype network of the nuclear C-mos gene (to the left), with a map showing collection localities of Calumma samples in Madagascar.
Calumma vohibola, a new chameleon species (Squamata: Chamaeleonidae) from the littoral forests of eastern Madagascar : http://www.mvences.de/p/p1/Vences_A220.pdf
Publications of Frank Glaw: http://www.zsm.mwn.de/her/e/pub_glaw.htm
เขียนโดย pskhun ที่ 9:41 PM