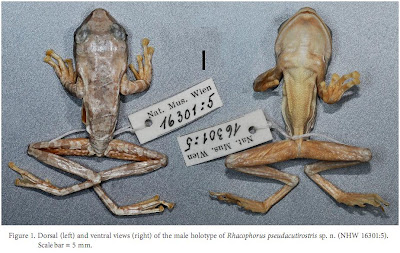 Abstract
The taxonomic status of the population of Rhacophorus angulirostris from West Sumatra is reassessed. This record was based on five specimens that had been collected in Padang, West Sumatra, more than a century ago, are stored in the collection of the Naturhistorisches Museum Wien, Austria, and were assigned to R. angulirostris from Borneo by Inger (1966). Reexamination revealed that the specimens from Sumatra share only few diagnostic characters with R. angulirostris from Borneo. Bornean and Sumatran specimens difer in the presence of a dermal projection at the tibio-tarsal articulation, male body size, snout shape, shape of the canthus rostralis and the supratympanic fold, extent of webbing between the ingers, size of the thenar tubercle, position of the nostrils, internarial distance, the eye-to-nostril distance, size of eye and tympanum, and size and position of the dentigerous processes of the vomers. he specimens from Padang were compared to all other Southeast Asian members of the genus and found to represent a distinct species, herein described as new, that appears to be not even closely related to R. angulirostris. Because the only record of R. angulirostris from Sumatra was based on these specimens, the geographic distribution of R. angulirostris is again restricted to northeastern Borneo. An identification key for the Rhacophorus species from Sumatra is provided. 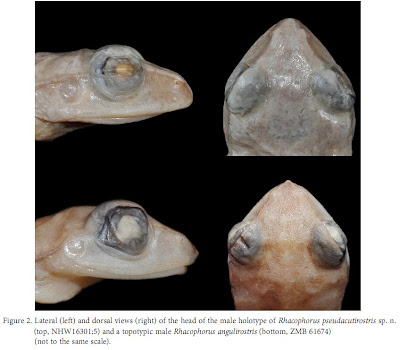 Etymology: the species epithet is composed of pseud­, the Latinized form of the Greek preix ψευδ­, meaning “false”, and the Latin words acutus, meaning “sharpened”, and ros­trum, meaning “snout”; in allusion to the former confusion of the new species with Rhacophorus acutirostris Mocquard, 1890 (name replaced with R. angulirostris Ahl, 1927) from Borneo. As common name, I suggest Sumatran Sharp-nosed Tree Frog.

— Key to the Sumatran species of Rhacophorus — 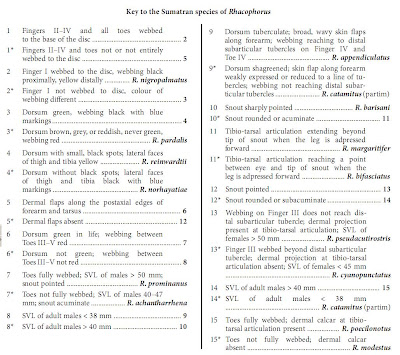 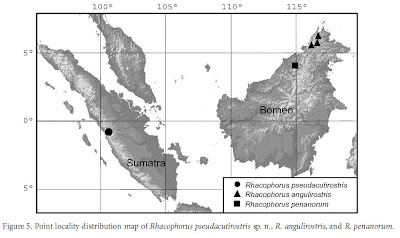