[Herpetology • 2010] Note on a Collection of Amphibians and Reptiles from Western Sumatra, Indonesia 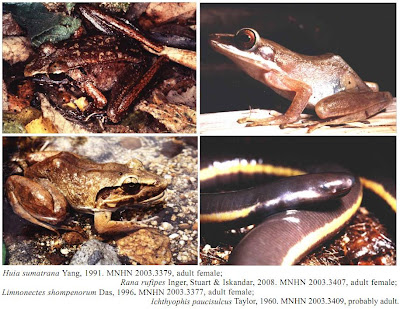 Abstract
Amphibians and reptiles were collected in Sumatra during two short field trips, around Lake Maninjau in Sumatera Barat Province (West Sumatra Province) and in Jambi Province. On the basis of preserved specimens and / or photographed specimens, the collection includes 17 species of amphibians (1 Caecilia, 16 Anura) and 38 species of reptiles (11 lizard and 27 snake species respectively). A new species of the genus Bufo is described from a single specimen on the basis of a combination of unique characters distinguishing it from Bufo sumatranus Peters, 1871, a similar species also known only from its holotype. Other noteworthy specimens are described in details. Given the poor knowledge of the herpetology of Sumatra, this collection, although limited in size, is important and 3 amphibian and 10 reptile species represent new provincial records. Of special interest is the discovery in West Sumatra Province of Lygosoma quadrupes, previously only known from Sumatera Selatan Province. A preliminary biogeographical hypothesis of the herpetofauna of Sumatra is provided.
Key words: Indonesia, Sumatra, Amphibians, Reptiles, Bufo totol spec. nov., Taxonomy 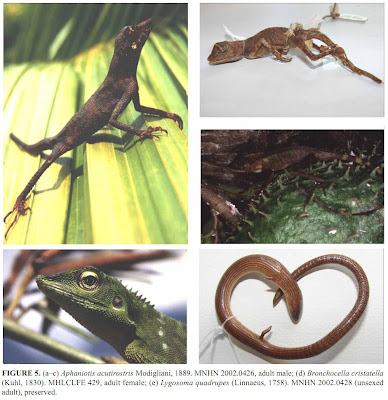