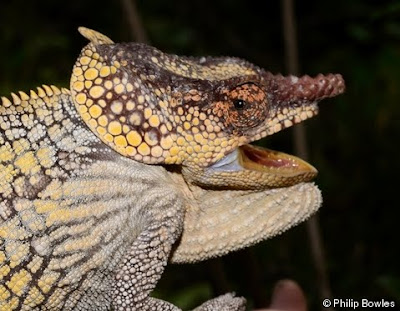 Calumma brevicorne (Günther, 1879)
Short-horned Chameleon
Abstract
....new description provided for Calumma brevicorne, a species that has been confused with several other species. Previously described taxonomic uncertainties associated with this species are resolved, including the problematic status of the Calumma brevicorne tsarafidyi holotype, which we consider to represent the nominate form and unlikely to have been collected at Tsarafidy. ....
Taxonomic Notes: This widespread chameleon was redescribed by Raxworthy and Nussbaum (2006), who distinguished six additional species formerly included within C. brevicorne and clarified that the proposed subspecies Calumma brevicorne tsarafidyi was invalid. Genetic studies to clarify the taxonomy and distribution of this species and its relation to other species of large occipital-lobed Calumma are ongoing (Boumans et al. 2007).
Distribution and habitat.- This species has a broad latitudinal distribution in humid mid-altitude rainforest of Madagascar but is known from only a narrow elevational band between 810 and 1000 m elevation (Fig. 2). Higher elevation records previously attributed to this species (Brygoo, 1971) probably represent other species. The species is known as far south as the southern end of the Anosy Mountains and as far north as the southeastern limits of the Tsaratanana Massif. The locality for UMMZ 215317 is especially noteworthy, as it represents the first record for the northwest of the island, in an area of relict High Plateau Forest on the Analavory Plateau. 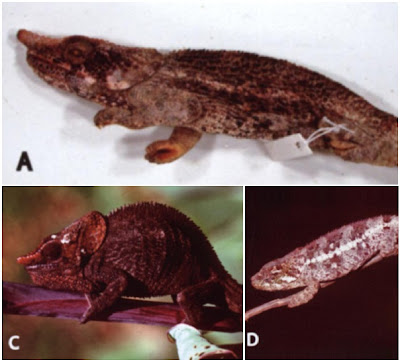 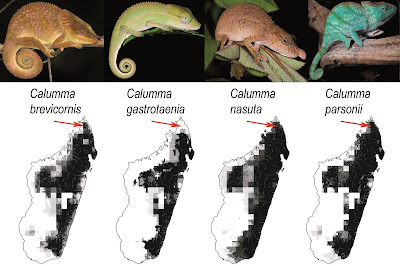