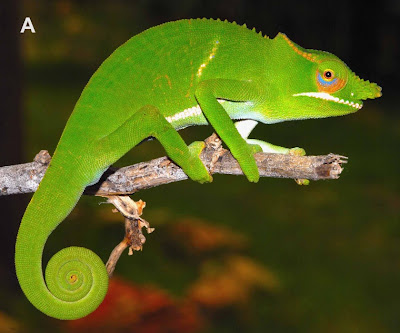 FIGURE 1. Male holotype of Furcifer timoni sp. nov., ZSM 2103/2007 in life
Abstract
We describe Furcifer timoni sp. nov., a new colourful and morphologically highly distinct chameleon from Montagne d’Ambre National Park in northern Madagascar. Males of this rainforest species are characterized by short paired bony rostral appendages which are completely absent in females. The new species differs from all other Furcifer species except F. bifidus (Brongniart, 1800) and F. balteatus (Duméril & Bibron, 1851) by a light ventrolateral band that is composed of scales which are arranged in a rosette-like manner. It differs from F. bifidus and from F. balteatus by smaller size, shorter rostral appendages of the males, and colouration. We suspect that F. timoni may be a cryptic species of the forest canopy. Furthermore, we designate a lectotype for Dicranosaura bifurca var. crassicornis Gray, 1864 and confirm its synonymy with Furcifer bifidus.
Key words: Squamata, Chamaeleonidae, Furcifer timoni sp. nov., Madagascar 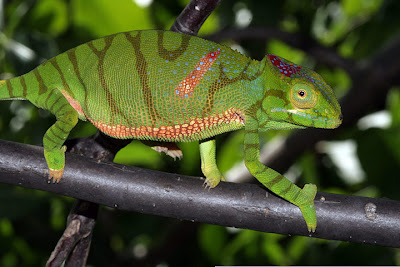 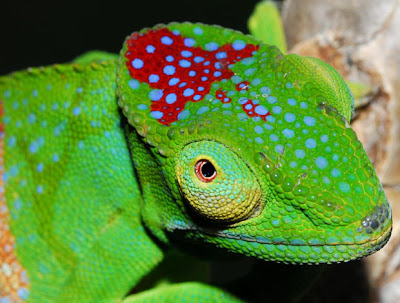 FIGURE 4. Gravid female paratype of Furcifer timoni sp. nov.
Etymology: The senior author wishes to dedicate this new chameleon species to his son Timon Robert Glaw.
Distribution, habitat and habits: Furcifer timoni is only known from the Montagne d’Ambre National Park, between 750 and 900 m altitude. The discovery of this distinctive new Furcifer species in Montagne d’Ambre was very surprising since this area has been repeatedly and intensively surveyed for reptiles over m any ye a r s (Moc qua rd 1895; Ramanant soa 1974; Andr eone 1991; Kauffm ann 1994; Raxwor thy & Nussbaum 1994; Glaw & Vences 1994; D'Cruze et al. 2008). Apart from the type locality the species possibly occurs in the Marojejy National Park (Fig. 6) as well, since photographs of a female taken by G. Gomboc at Marojejy (between Camp 1 and Camp 2) resemble females of F. timoni and might represent this or a very closely related species. It differs from the studied type specimens (see Table 1) by a dorsal crest composed of more (ca. 20) tubercles (see Fig. 6). Similar to the situation at Montagne d'Ambre, all previous herpetological surveys in the Marojejy National Park since 1968 (see summary in Raselimanana et al. 2000) did not reveal any record of a chameleon resembling F. timoni, indicating that both the Montagne d'Ambre and the Marojejy populations had been overlooked, possibly due to them occupying a cryptic niche hidden high up in the tree canopy.
At Montagne d'Ambre, Furcifer timoni was exclusively found in mid-altitude primary rainforest during the rainy season, in close syntopy with Furcifer petteri. All specimens we captured in the years 2004–2008 were found in the period 20–26 February, roosting at night in the vegetation. The only male seen and captured during the same period was captured from a position more than 3 m above the ground. In contrast, gravid females were relatively common in late February, usually sitting on branches ca. 1.5–3 m above the ground. We suspect that they were just descending from the trees to bury their eggs into the ground. Data on egg
numbers of preserved females are given in Table 1.
The description of Furcifer timoni adds a distinctive new species to the Furcifer bifidus group. From a morphological point of view this group can be divided into two subgroups: F. bifidus and F. balteatus....
Glaw, F.; Köhler, J.; Vences, M. 2009: A distinctive new species of chameleon of the genus Furcifer (Squamata: Chamaeleonidae) from the Montagne d’Ambre rainforest of northern Madagascar. Zootaxa, 2269: 32-42. : http://www.zsm.mwn.de/her/pdf/246_Glaw_et_al_2009_Furcifer_timoni_ZOOTAXA.pdf
A decade of new species discovered in Madagascar
- in pictures http://gu.com/p/2phnk/tw
เขียนโดย pskhun ที่ 8:36 PM