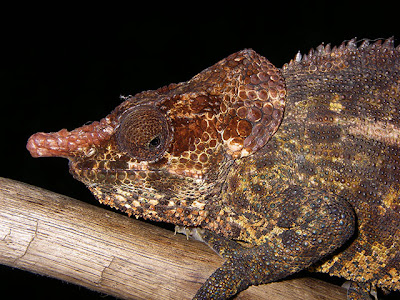 Calumma crypticum, male
As a result of our recent herpetological surveys conducted in Madagascar, important new collections of large occipital-lobed Calumma chameleons have been made. These collections allow the recognition of six new Calumma species, in addition to the six currently recognized species. Five of the new species were located at specific montane regions, and one is broadly distributed in mid-altitude forest within the interior of the island. As previously reported for Brookesia dwarf chameleons, species richness in this Calumma group is greatest in northern Madagascar. An identification key is given for all 12 species and a new description provided for Calumma brevicorne, a species that has been confused with several other species. Previously described taxonomic uncertainties associated with this species are resolved, including the problematic status of the Calumma brevicorne tsarafidyi holotype, which we consider to represent the nominate form and unlikely to have been collected at Tsarafidy. Sexual dimorphism (including hemipenis development), biogeography, and conservation issues are also discussed for the group. The Bemanevika Lakes region of Southwest Tsaratanana harbors a new Calumma species not currently recorded for any protected area, and forest of this region is suggested for inclusion within a future reserve.