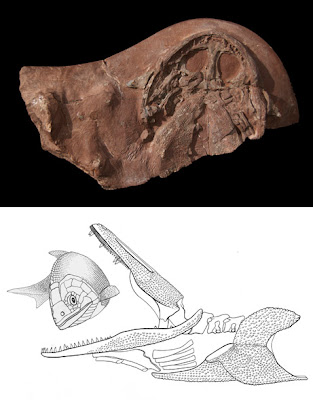 Abstract
The plagiosaurine Gerrothorax pulcherrimus, a ubiquitous faunal component of the Fleming Fjord Formation, is recognized by tubercular ornamentation, contact between the postfrontal and supratemporal, at least two tooth rows on the posterior coronoid, and a posttemporal fenestra that is small or absent. Gerrothorax pulcherrimus also possesses a derived pectoral morphology that includes an interlocking claviculocleithral complex and an interclavicle with paired posterolateral projections and a transversely truncated posterior margin. Gerrothorax pustuloglomeratus is a junior synonym of G. pulcherrimus; other Gerrothorax species cannot be differentiated from G. pulcherrimus. Flat-headed temnospondyls have been interpreted as having achieved a large gape by raising the skull rather than by lowering the jaw. No detailed, corroborating anatomical evidence from the atlanto-occipital joint, however, has ever been adduced. In G. pulcherrimus the widths of the atlantal and condylar facets are comparable, but dorsoventrally the condylar facets are 45% longer than the comparable dimension of the atlantal facets. Elevation of the skull occurred by atlanto-occipital rotation, and was facilitated by a radius of curvature of the dorsal part of the condylar facets that is shorter than that of the inferior part. From a resting, closed mouth position, G. pulcherrimus was capable of elevating the skull through an excursion of approximately 50°, a movement that rotated the quadrate forward and protruded the lower jaw. An elongate, broadly open neural canal in the atlanto-occipital region, and dorsal displacement of the occipital condyles, are related to relieving the spinal medulla of the sharp angular deformation that head lifting might entail.
---------------------------
IN THE NEWS: Potty-Mouth Amphibian Had Weird Bite
It's not a jaw-dropping find ... but it is a jaw-raising one.
Recently found fossils of the extinct amphibian Gerrothorax pulcherrimus show that the creature lifted its head to eat, rather than lowering its bottom jaw as other vertebrates do. (The fossil, top, shows a view of the creature's skull as if from below looking up.)
The highly unusual action is not unlike that of a toilet seat.
"The animals could throw their heads upward and backward, creating a huge mouth gape with only the slightest lowering of the lower jaw—perfect for a bottom-dwelling ambush predator," Farish Jenkins, of Harvard University, said in a statement.
His team's research was published in the December 2008 issue of Journal of Vertebrate Paleontology.
The bony-armored Gerrothorax lived 210 million years ago, dwelling in warm lakes and catching fish in its gaping, fanged maw. About three feet (one meter) long, it had a flattened body and short, stubby limbs.
"It's the ugliest animal in the world," Jenkins told Reuters. 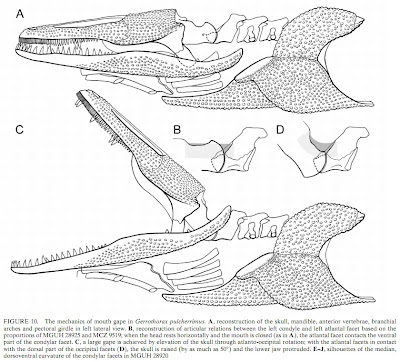