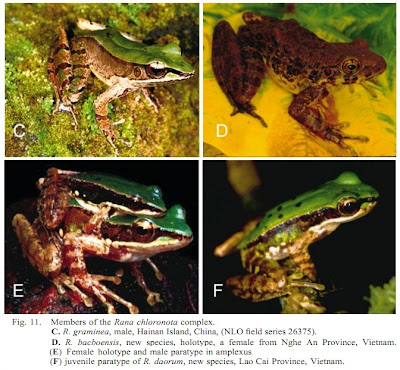 Abstract
The Southeast Asian cascade frog, Rana livida (Blyth, 1856), has long been suspected to be a complex of species. Several different forms are described from across its vast range. The loss of type material and disparate sampling efforts are challenges. Is variability in this species due to geographic variation or to the presence of multiple species? We use concordant evidence from morphology, morphometrics, cellular DNA content, and allozyme electrophoresis to investigate diversity in R. livida from Vietnam. Three distinct species are recognized on the basis of morphology, as are four other suspect groups (morphotypes). Discriminant function analyses of morphometric data detect patterns of morphological variation among all seven groups. Pairwise comparison of cellular DNA content using t-tests shows signiﬁcant differences among sympatric morphotypes, suggesting they represent distinct species. This hypothesis is supported by an analysis of 14 allozymic loci, in which ﬁxed allelic differences are found among specimens in sympatry and allopatry. Examination of available type material of four junior synonyms of R. livida results in their recognition as species. One of these species, R. chloronota, is a wide-ranging species erroneously referred to as R. livida. Seven species occur in Vietnam.

We describe six new cryptic species belonging to the Rana chloronota complex, redescribeR. chloronota, R. livida, R. sinica, and R. graminea, and give comments on R. leporipes. Three of these new species (R. bacboensis, new species, R. hmongorum, new species, and R. daorum, new species) occur in montane forests in northern Vietnam, and two (R. banaorum, new species and R. morafkai, new species) are known only from the Tay Nguyen Plateau of Vietnam’s Central Highlands. One species, R. megatympanum, new species, occurs in portions of both northern Vietnam and the Central Highlands. An identiﬁcation key for the Rana chloronota complex from Vietnam is provided. The ﬁnding of six cryptic species within a small portion of the geographic region of R. chloronota suggests that many more cascade ranids await discovery. This documentation has serious implications for conservation; each of the new species occurs in sympatry with at least one other member of the complex. Consequently, far more species are being affected by habitat loss than was previously thought.

DISTRIBUTION AND ECOLOGY: Rana bacboensis occurs in forested montane river systems across northern Vietnam. These rivers vary from shallow and slow moving to torrential and deep. Specimens may be found on boulders and logs, both in and around the water and in the adjacent forest. Radiographs revealed that females feed on large invertebrates, including small freshwater crabs. Females were collected in April–May and October. The holotype, collected in October, has fully developed ova, and two females (ROM 26358, 29529) collected in the spring have undeveloped ova suggesting a fall breeding season. No calls are associated with this species. The tadpoles are unknown.

REMARKS: Cascade ranids bearing white eggs lay them under rocks, sheltered from the sunlight (Pope, 1931; ROM ﬁeld notes, 1996). In contrast, the black eggs of R. bacboensis might be found where they are exposed to sunlight to promote development, are quirement for some species with melanic eggs (Duellman and Trueb, 1986).

ETYMOLOGY: The speciﬁc name is a patronym for the ao people (pronounced –D‘‘zao’’) of northern Vietnam.

DISTRIBUTION AND ECOLOGY: This species is known from the vicinity of Sa Pa village,
Lao Cai Province in northern Vietnam. The photograph of a froglet of R. livida (in Karsen et al., 1998) also documents the occurrence of R. daorum in Hong Kong. The distinctive granular dorsolateral fold of R. daorum is clearly visible in the misidentiﬁed frog.
In early May, male Vietnamese R. daorum are actively calling by 1000 hours on partially submerged rocks in cascades as well as in vegetation adjacent to the streams. Females, although not as common, can be found slightly farther away from streams in more dense vegetation. One male (ROM 26394) was found in amplexus with the holotype (ﬁg. 6E).

ETYMOLOGY: The speciﬁc name is a patronym for the Hmong (pronounced ‘‘huhmung’’) people, an ethnic group in the northern montane regions of Vietnam. Their assistance made it possible for us to document the fauna of Hoang Lien Mountains.

DISTRIBUTION AND ECOLOGY: This species is only known only from the vicinity of
Mount Fan Si Pan at approximately 1900 m or above. Adults were found along the cascades of a waterfall and along the mossy slopes of a human-made culvert. 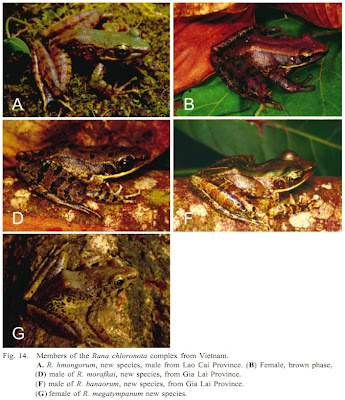 ETYMOLOGY: The speciﬁc name honors David Joseph Morafka, Research Associate
of the Royal Ontario Museum and California Academy of Sciences, in recognition of his
unfailing friendship, his unselﬁsh development and perpetuation of multiple, independent research programs, and for his catapulting the careers of many conservation biologists.

DISTRIBUTION AND ECOLOGY: Rana morafkai is known only from the Tay Nguyen Plateau of the Central Highlands, Gia Lai Province, Vietnam. It inhabits forested montane river systems. Specimens may be found on or near rapids or waterfalls. In at least May and June, male specimens may have distended gular pouches, indicating that this species breeds in spring.

ETYMOLOGY: The speciﬁc name is a patronym for the Ba Na people, an ethnic group living on the Tay Nguyen Plateau (Central Highlands) of south-central Vietnam where this species occurs.

DISTRIBUTION AND ECOLOGY: Rana banaorum is known only from the Tay Nguyen Plateau of the Central Highlands, Gia Lai Province, Vietnam. It inhabits forested montane river systems on or near rapids or waterfalls of primary and disturbed second growth. In May and June males have tight, leathery gular pouches, suggesting that they are not calling and that the breeding season occurs during some other time.

REMARKS: Inger and Chanard (1997) and Inger et al. (1999) noted that specimens of Rana chloronota (as R. livida) from An Khe have more pronounced dorsolateral folds than elsewhere in Vietnam. These frogs do not ﬁt Bourret’s (1942) interpretation of R. graminea as a ‘‘northern variety’’ of R. chloronota. These differences likely reﬂect the occurrence of three sympatric species of the R. chloronota complex from this region. Some male R. banaorum have indistinct, microscopic spinules on the dorsal surface of the leg extending to the feet, forming a ‘‘saw-tooth’’ formation along the lateral edge of toe (seen in FMNH specimens that are not part of the type series).

ETYMOLOGY: The speciﬁc name is a noun in opposition, derived from the Latin preﬁx ‘‘mega’’ (meaning very large) and ‘‘tympanum’’, in reference to the relatively large tympanum of this species.

DISTRIBUTION AND ECOLOGY: Rana megatympanum is known from northern and north-central Vietnam. It occurs in montane rivers that vary from shallow and slow moving to torrential and deep. It may be found on boulders and logs, both in and around the water as well as in the adjacent forest. Radiographs revealed that large invertebrates (both insects and crustaceans) form part of the diet. Vocalizations and tadpoles are unknown.

REMARKS: The dorsolateral fold and very large tympanum of male R. megatympanum potentially make it Bourret’s (1942) ‘‘northern form’’ of R. chloronota (5 R. graminea). However, R. graminea is bright green above (Boulenger, 1899) in contrast to the olivebrown dorsum of R. megatympanum. 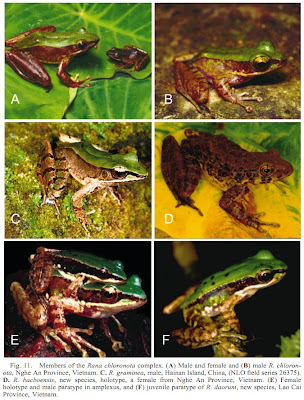 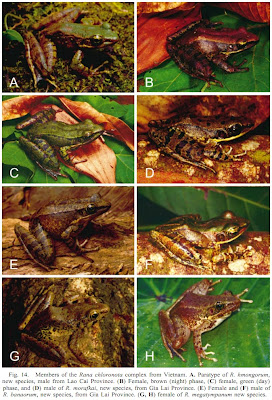 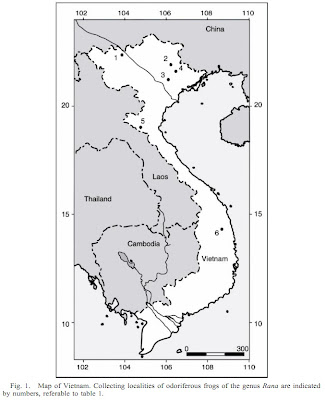 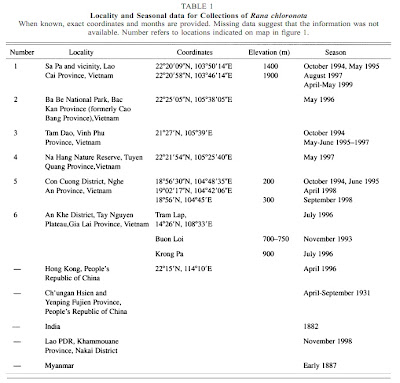