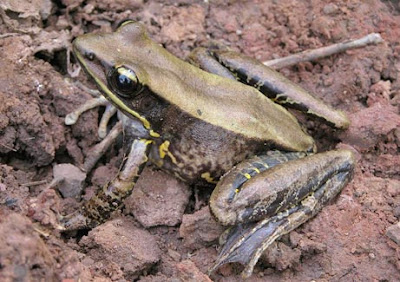 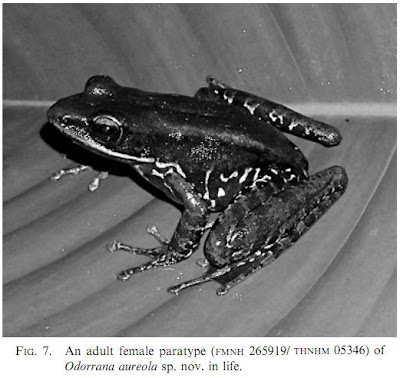 ETYMOLOGY— The specific epithet aureola taken from aureolus (L.) for ornamented with gold, in reference to the diagnostic yellow markings on the limbs and flanks of this species.
DISTRIBUTION AND ECOLOGY— Odorrana aureola is currently known only from Phu Luang Wildlife Sanctuary and Phu Kradueng National Park (Fig. 1) in Loei Province, Thailand. The Phu Luang specimens were collected at night (1915–2030 h) on boulders, rock outcrops and a fallen tree within 4 m of swift, 1–8-m-wide rocky streams near cascades, except FMNH 265922 was collected in the water at the edge of a 2-m-wide stream with slow current between two small dams. Odorrana aureola was collected in sympatry with an apparently undescribed species that morphologically resembles O. chloronota (e.g. FMNH 265931/THNHM 05126, FMNH 265932/THNHM 05127) but that is not the sister taxon of O. chloronota (Stuart et al., 2006). 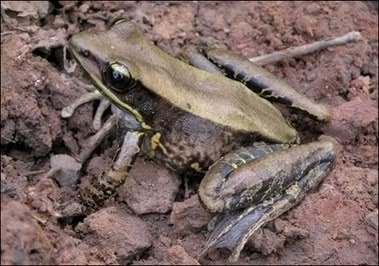 Bangkok, Thailand, May 24, 2007 — A new species of color-changing frog found in northeastern Thailand sits motionless on the brown soil.
Named the Phu Luang Cliff frog after the national park where it lives, the amphibian, which can grow to 3.5 inches (8.9 centimeters) has a naturally green body that can turn brown.
Scientists have found the rare frog in mountain waterfalls and creeks between 3,280 to 4,291 feet (1,000 to 1,500 meters) above sea level, Tanya Chan-ard, curator of Bangkok's National Science Museum, told the Associated Press.
The frog was discovered a few years ago, although scientists have only recently began studying it, Tanya said. --- http://news.nationalgeographic.com/news/2007/05/photogalleries/wip-week30/photo4.html 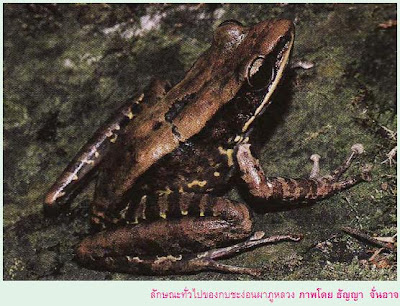