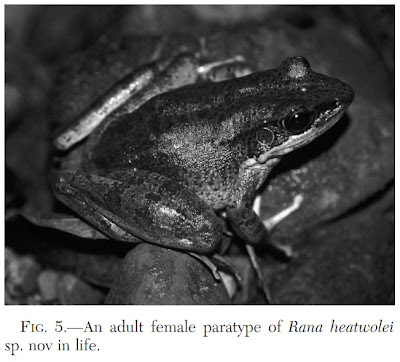 ABSTRACT
Three new species of frogs allied to Rana megatympanum are described from Laos and Vietnam. One new species is from the Bolaven Plateau of southern Laos, a second is from central Laos and adjacent central Vietnam, and a third is from northern Laos. The three new species are distinguished from similar species by skin texture, the location of white spinules on the skin in males and females, spotting on the lips, body size, relative tympanum size, and unpigmented eggs. 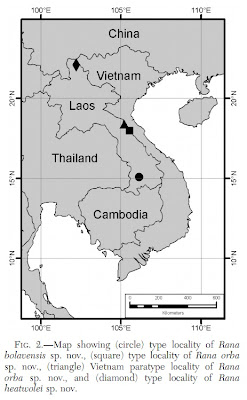 Distribution and ecology.— Rana bolavensis is currently known only from wet evergreen forest at 1000–1200 m elevation on the Bolaven Plateau of southern Laos (Fig. 2), a large, volcanic plateau isolated from the Annamite Mountain chain by the Xe Kong River Valley. Specimens were collected at night on rocks and vegetation along rocky streams, except FMNH 258310 (adult male) was found at night on a low tree branch about 100 m from a stream, FMNH 258166 (juvenile) was found at night on leaf litter in the forest during a heavy rain, and FMNH 258241 (juvenile) was found during the day under leaf litter in the forest. These observations suggest that juveniles may be more terrestrial than adults. Many specimens of both sexes were infested with mites on the eyelid, ﬁngers, and toe webbing. One other species of frog, Leptobrachium buchardi Ohler, Teynie´, and David, 2004, has been described from the highlands of the Bolaven Plateau, and may also be endemic to the area. Much of the wet evergreen forest on the top of the Bolaven Plateau is being converted to coffee plantations, a practice that probably threatens the survival of R. bolavensis.

Etymology.— The speciﬁc epithet bolavensis refers to the type locality on the Bolaven Plateau.

Distribution and ecology.— Rana orba is currently known from the northern Truong Son (Annamite Highlands) of the Laos-Vietnam frontier in eastern Khammouan and Bolikhamxay Provinces, Laos, and western Ha Tinh Province, Vietnam (Fig. 2). Specimens were collected at night in evergreen forest on leaf litter, rocks, rock ledges, logs, tree roots, and vegetation within 6 m of rocky streams. The Laos specimens were found at 600–700 m elevation and the single Vietnam specimen was found at 200 m elevation.

Etymology.— The speciﬁc epithet orba (L.) for orphan, is in reference to the species being known in Vietnam only from a single juvenile.

Etymology.— The speciﬁc epithet is a patronym for Dr. Harold F. Heatwole, co-collector of the new species, whose guidance, support, and companionship greatly aided the senior author in conducting herpetological ﬁeldwork in Laos.

— DISCUSSION —
Our descriptions of three additional species supplement the recent ﬁndings that the morphologically variable cascade ranids allied to R. livida represent a complex of species living in the montane lotic streams of Laos and Vietnam (Bain and Nguyen, 2004; Bain et al., 2003; Orlov et al., 2003; Stuart et al., 2005). Often more than one species in this complex occurs sympatrically, but only R. chloronota is currently recognized to be relatively widespread (Bain and Nguyen, 2004; Bain et al., 2003). The discovery of many new species with relatively small distributions has important consequences for conservation of biodiversity in Indochina. Further studies to identify evolutionary lineages in these frogs, and their phylogenetic relationships to each other, are warranted and underway (B. L. Stuart, unpublished data).