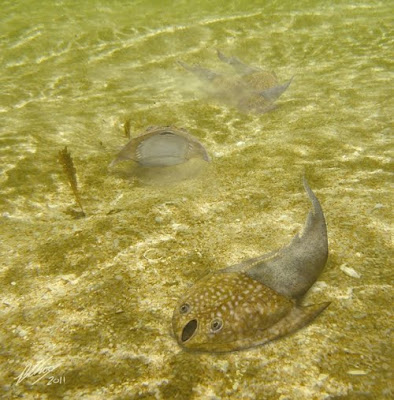 Most living vertebrates are jawed vertebrates (gnathostomes), and the living jawless vertebrates (cyclostomes), hagfishes and lampreys, provide scarce information about the profound reorganization of the vertebrate skull during the evolutionary origin of jaws. The origin of a mouthful of jaws and teeth is one of the biggest steps in our evolutionary history but fossils have not provided any insights. Scientists from the Institute of Vertebrate Palaeontology and Palaeoanthropology (IVPP), Chinese Academy of Sciences, the University of Bristol (UK), Museum national d'Histoire naturelle (Paris, France) and the Paul Scherrer Institut (Switzerland) collaborated to study the structure of the head of a primitive fossil jawless fish called a galeaspid, Shuyu zhejiangensis, claims to have solved this scientific riddle by studying the brain of a 400 million year old fossilized jawless fish – an evolutionary intermediate between the living jawless and jawed vertebrates, according to a paper published in the journal Nature on August 18, 2011.
The extinct bony jawless vertebrates, or “ostracoderms”, are regarded as precursors of jawed vertebrates and provide insight into this formative episode in vertebrate evolution. Scientists, using synchrotron radiation X-ray tomography, describe the cranial anatomy of galeaspids, a 435–370-million-year-old “ostracoderm” group from China and Vietnam. They found the paired nasal sacs of galeaspids are located anterolaterally in the braincase, and the hypophyseal duct opens anteriorly towards the oral cavity. These three structures (the paired nasal sacs and the hypophyseal duct) were thus already independent of each other, like in gnathostomes and unlike in cyclostomes and osteostracans (another “ostracoderm” group), and therefore have the condition that current developmental models regard as prerequisites for the development of jaws. This indicates that the reorganization of vertebrate cranial anatomy was not driven deterministically by the evolutionary origin of jaws but occurred stepwise, ultimately allowing the rostral growth of ectomesenchyme that now characterizes gnathostome head development.
Instead of breaking the fossil up, they studied it using high energy X-rays at the Swiss Light Source in Switzerland, revealing the shape of the animal's brain and sense organs.
Lead author, GAI Zhi-kun, a Ph. D Student co-sponsored by the University of Bristol and the IVPP, China, said "We were able to see the paths of all the veins, nerves and arteries that plumbed the brain of these amazing fossils. They had brains much like living sharks – but no jaws", "We've been able to show that the brain of vertebrates was reorganised before the evolutionary origin of jaws."
Co-author and project designer, Professor Philip Donoghue of the University of Bristol's School of Earth Sciences said: "In the embryology of living vertebrates, jaws develop from stem cells that migrate forwards from the hindbrain, and down between the developing nostrils. This does not and cannot happen in living jawless vertebrates because they have a single nasal organ that simply gets in the way."
Professor Min Zhu of IVPP, coauthor and research designer, continued: "This is the first real evidence for the steps that led to the evolutionary origin of jawed vertebrates, and the fossil provides us with rock solid proof."
"This research has been held back for decades, waiting for a technology that will allow us to see inside the fossil without damaging it. We could not have done this work without this crazy collaboration between palaeontologists and physicists" , said Professor Philippe Janvier of the Museum national d'Histoire naturelle, Paris.
"We used a particle accelerator called synchrotron as X-ray source for performing non destructive 3D microscopy of the sample. It allowed us to make a perfect computer model of the fossil that we could cut up in any way that we wanted, but without damaging the fossil in any way. We would never have got permission to study the fossil otherwise", said Professor Marco Stampanoni of the Paul Scherrer Insitut, the location of the Swiss Light Source.
This work was supported by the Chinese Academy of Sciences, the Chinese Foundation of Natural Sciences, the Major Basic Research Projects of MST of China, the Paul Scherrer Institut, European Union FP6, the Leverhulme Trust, the Natural Environmental Research Council, the SYNTHESYS Project and a Dorothy Hodgkin studentship from the Royal Society.
Etymology. Shu (Chinese Pinyin): dawn; yu (Chinese Pinyin): fish. But essentially ‘jawed fish’; thus, Shuyu here means ‘dawn of gnathostomes’. The new genus is erected for ‘Sinogaleaspis’ zhejiangensis Pan, 1986, from the Maoshan Formation (late Llandovery epoch to early Wenlock epoch, Silurian period, ~430 million years ago) of Zhejiang, China. 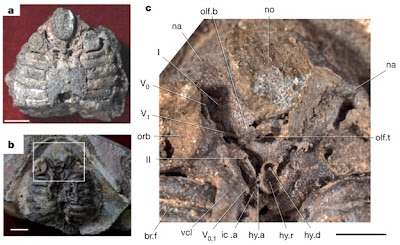 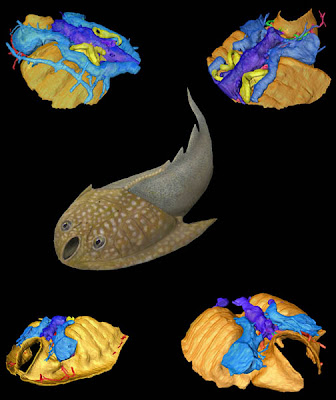 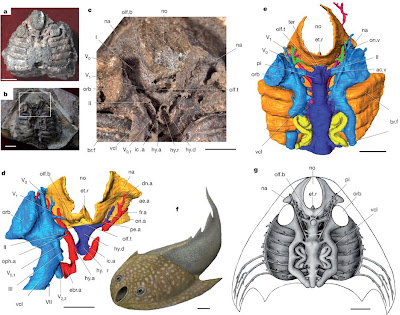 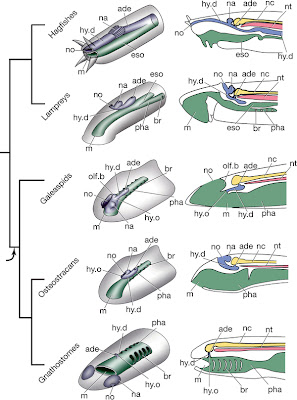