[Herpetology • 1991] Brookesia valerieae • Field observations on some dwarf chameleons (Brookesia spp.) from rainforest areas of Madagascar, with the description of a new species 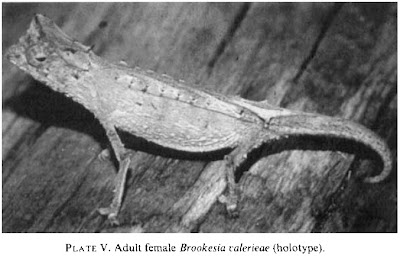 Six species of Brookesia dwarf chameleons were recorded during two rainforest expeditions in Madagascar. One of these is described as a new species Brookesia valerieae based on the arrangement of the nine pairs of dorso-lateral spines, the lack of a pelvic shield, and dorsal chevron markings. Observations were made on the defence and roosting behaviours shown by these six species. Aspects concerning the evolution and conservation in Madagascar are discussed for this poorly studied group of endemic Malagasy reptiles. 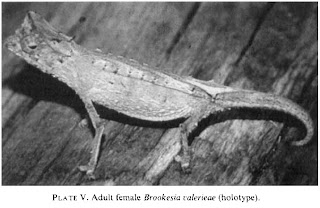 
Etymology: This species of chameleon has been named for Valerie M. Raxworthy in recognition of her support towards this work in Madagascar.