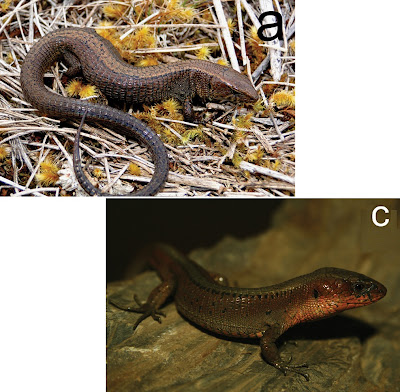 Abstract
Two new species of lizards assigned to the genus Euspondylus from the montane forests of the Peruvian Andes in the Pasco Department (central Peru) and Ayacucho Department (southern Peru) both at elevations of 2550 and 3450 m, respectively, are described. The new species are distinguishable from all other Peruvian and Ecuadorian species of Euspondylus by a unique combination of morphometric, scalation and color pattern characteristics. Natural history data for the new species and for Euspondylus spinalis are also provided.
Keywords: Euspondylus, Gymnophthalmidae, Peru, new species 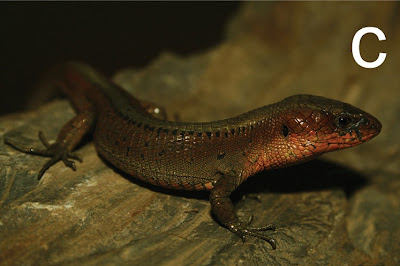 Etymology: The specific epithet is based on the Quechua word “chasqui”, which refers to the messengers of the Incan empire, men who, on foot, carried the messages throughout the imperial territory in the Cordillera de los Andes where these lizards are found. 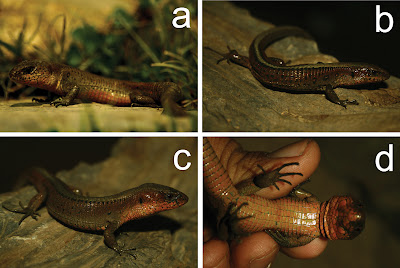 Distribution and natural history: Euspondylus chasqui is known from two localities within a studied area of approximately 12 km² in the Río Apurímac valley (Fig 4). It inhabits secondary forests and human settlements. The individuals observed were mostly found at midday under the rocks or foraging between stones, always near medium-sized rocks that they use for hiding. The soil under these rocks is generally more damp compared to the rest of the soil around. A clutch with two eggs was found under the litter, as well as several gravid females (CORBIDI 06955, 06966, 06968–69, 08417, 08420–21, 08424, 08431–32) from the dry and wet season (August and December, 2010) containing two eggs inside the abdominal cavity. This suggests that the maximum clutch size is two and that the reproductive cycle and birth of neonates can be at least twice a year. The egg length range is 3.4–14.1 mm (x- = 8.3 mm, n= 20) and width range is 2.8–5.9 mm (x- = 4.5 mm, n=20), SVL range of gravid females is 48.5–72.7 mm. We did not see nests sharing the same area. Euspondylus chasqui does not occur sympatrically with any other species of Euspondylus or Proctoporus; however, a marsupial frog, Gastrotheca rebeccae, was found at the same location. Euspondylus chasqui was the most abundant species in the type locality, where 35 individuals were found in four hours by four surveyers. 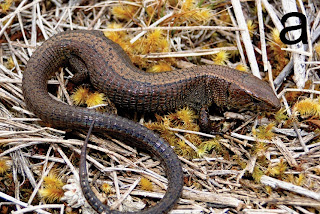 Etymology: The specific name oreades refers to the Oreades, nymphs of Greek mythology. These feminine spirits lived and protected isolated mountains and caves, places that recall the type locality where this species was found. 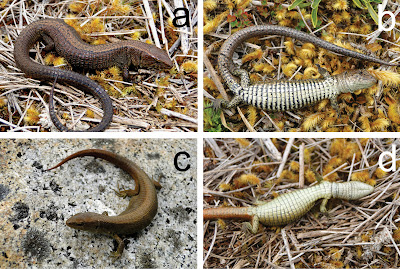 Distribution and natural history: Euspondylus oreades is known only from the type locality, an isolated hill at an elevation of 3400 m in the Cordillera Oriental in central Peru, inside Yanachaga-Chemillen National Park (Oxapampa Bioesphere Reserve) (Fig. 4). Individuals were found in grassland (Puna habitat) under rocks, fallen trunks, moss, and under the base of terrestrial spiny bromeliad (Puya sp.) by the day. Only the marsupial frog Gastrotheca griswoldi was found sympatric with Euspondylus oreades. A total of 33 individuals of Euspondylus oreades were found in seven hours of survey by four herpetologists. Four nests of the new species of Euspondylus were found under the rocks and the number of eggs found per nest vary from two to 15. Two eggs of Euspondylus oreades hatched during the surveys and the new hatchlings ran to hide immediately after leaving the egg shell. One of these hatchlings was collected (CORBIDI 07223) and measured (SVL = 23.0 mm). Six females were collected, five of them contained eggs in their oviducts, only CORBIDI 07216 contained one egg, the rest of mature females contained two eggs, SVL range of these specimens was 53.0–61.0 mm. Egg length ranged from 3.2–13.2 mm (x- = 8.6 mm, n= 9) and width ranged from 3.6–5.7 mm (x-= 3.7 mm, n=9). The ornithological team in Santa Barbara collected one Variable Hawk Buteo polyosoma (CORBIDI/FHC 245) that contained three whole Euspondylus oreades individuals in the crop and the remains of three other individuals in the stomach. Furthermore, the team collected one Andean Caracara Phalcoboenus megalopterus (CORBIDI/WV 315) with remains of an unassigned Euspondylus species in its stomach. These findings could suggest that these lizards can be found in the open, but for Euspondylus oreades we did not have such observations. However, one of us (GC) found Euspondylus chasqui running between stones when sampling, which might be a behavior that could occur in Euspondylus oreades as well. 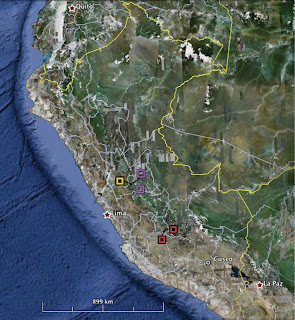