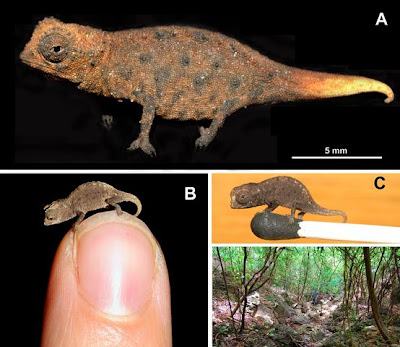 Abstract
Background
One clade of Malagasy leaf chameleons, the Brookesia minima group, is known to contain species that rank among the smallest amniotes in the world. We report on a previously unrecognized radiation of these miniaturized lizards comprising four new species described herein.

Methodology/Principal Findings
The newly discovered species appear to be restricted to single, mostly karstic, localities in extreme northern Madagascar: Brookesia confidens sp. n. from Ankarana, B. desperata sp. n. from Forêt d'Ambre, B. micra sp. n. from the islet Nosy Hara, and B. tristis sp. n. from Montagne des Français. Molecular phylogenetic analyses based on one mitochondrial and two nuclear genes of all nominal species in the B. minima group congruently support that the four new species, together with B. tuberculata from Montagne d'Ambre in northern Madagascar, form a strongly supported clade. This suggests that these species have diversified in geographical proximity in this small area. All species of the B. minima group, including the four newly described ones, are characterized by very deep genetic divergences of 18–32% in the ND2 gene and >6% in the 16S rRNA gene. Despite superficial similarities among all species of this group, their status as separate evolutionary lineages is also supported by moderate to strong differences in external morphology, and by clear differences in hemipenis structure.

Conclusion/Significance
The newly discovered dwarf chameleon species represent striking cases of miniaturization and microendemism and suggest the possibility of a range size-body size relationship in Malagasy reptiles. The newly described Brookesia micra reaches a maximum snout-vent length in males of 16 mm, and its total length in both sexes is less than 30 mm, ranking it among the smallest amniote vertebrates in the world. With a distribution limited to a very small islet, this species may represent an extreme case of island dwarfism. 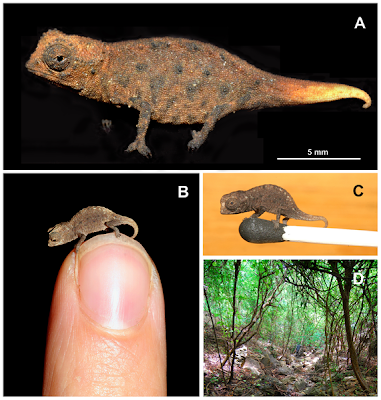 Figure 8. Brookesia micra sp. n. from Nosy Hara, northern Madagascar.
(A) adult male on black background, showing orange tail colouration; (B) juvenile on finger tip; (C) juvenile on head of a match; (D) habitat along a small creek on western flank of Nosy Hara, where part of the type series was collected.

Etymology.— The species epithet is a latinized derivation from the Greek word “μικρός” (mikros), meaning “tiny” or “small” and referring to the extremely diminutive body size. It is used as an invariable noun in apposition.

Distribution.— Only known from two sites (see localities in type series) on the small island of Nosy Hara, northern Madagascar (e.g. Fig. 8D). Remarkably, no Brookesia species was recorded during intensive herpetological surveys of Nosy Hara, nearby islands and the adjacent mainland, suggesting that B. micra might be difficult to record.

Natural History.— B. micra was found during the day active on the ground in a mosaic of eroded limestone boulders and dry forest leaf litter, and at night roosting on branches in very low vegetation (ca. 5–10 cm above the ground). In contrast to B. tristis and B. confidens its occurrence was not remarkably patchy. 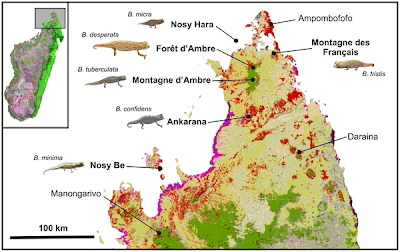 Figure 1. Map of northern Madagascar showing distribution of species of the Brookesia minima group.
Type localities in bold, B. dentata, B. exarmata, B. karchei, B. peyrierasi, and B. ramanantsoai not included, because their ranges are located further south; see inset maps in Fig. 2. Orange (dry forest) and green (rainforest) show remaining primary vegetation in 2003–2006, modified from the Madagascar Vegetation Mapping Project (http://www.vegmad.org). 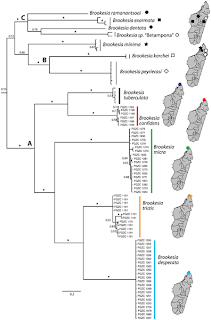 Figure 2. Phylogenetic relationships among species of the Brookesia minima group based on mitochondrial DNA sequences.