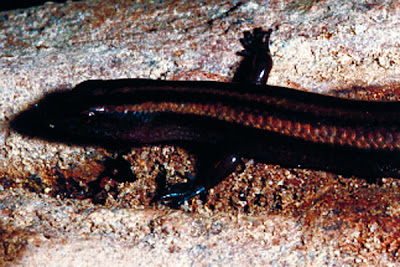 Abstract
A new species of scincid lizard of the genus Lipinia is described from isolated localities in Borneo, from Sabah, Sarawak, and Kalimantan. The species was formerly allocated to Lipinia quadrivittata (Peters, 1867), a species known from the southern Philippines and Sulawesi in eastern Indonesia. The new species is compared with congeners from Borneo and other parts of Southeast Asia and the South Pacific and is diagnosable in showing the following combination of characters: small body size (SVL to 40.6 mm); external ear opening absent; lower eyelid with a clear spectacle; midbody scale rows 20; longitudinal scale rows between parietals and base of tail 46–50; lamellae under toe IV 16–17; supralabials 6; infralabials 6–7; subcaudals 68–74; and dorsum tan brown with dark gray-brown stripes. Although morphologically similar to the arboreal L. quadrivittata, the new species from Borneo differs in coloration and its preference for terrestrial habitats. In addition, analysis of DNA sequence data from 293 base-pairs of the cytochrome b gene for the new species and four congeners (Lipinia leptosoma, Lipinia pulchella, Lipinia noctua, and L. quadrivittata) demonstrates it is a separate lineage (> 15% sequence divergence from its sister taxa L. quadrivittata) with an independent evolutionary history