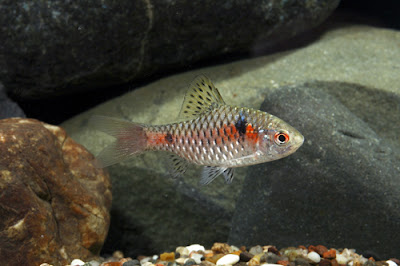 Abstract
Puntius padamya, new species, is described from the type locality near Mandalay, in the Ayeyarwaddy River drainage, Myanmar. Referred specimens are reported from the lower Chindwin River. Puntius padamya is distinguished from other species of the P. conchonius species group above all by the colour pattern. Males possess a broad red band from the head to the base of the caudal fin, abdominal scales with dark margins, and hyaline dorsal, anal and pectoral fins with conspicuous black spots and black distal margins. Both sexes possess a vertically elongate dark humeral blotch and a small, inconspicuous dark blotch on the side of the caudal peduncle. Puntius padamya is a well known aquarium fish, commercialized as “Odessa barb”.

Etymology:  Padamya is the Burmese word for ruby, given here with reference to the name ruby barb used in the ornamental fish trade, and to the bright red colour of the males. It is to be treated as a noun in apposition.

Geographical distribution: Known only from the type locality, an artificial pond in Toe Gyi village, situated just above the Anisakan Falls, near Pyin Oo Lwin, on the road Mandalay-Hsipaw, and from the lower Chindwin River. 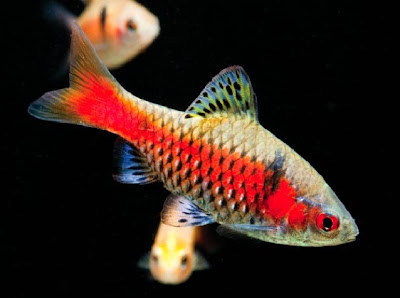 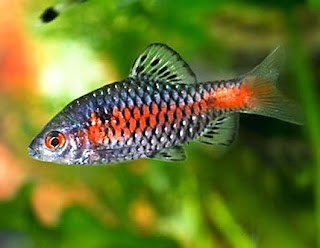