Abstract
Examination of types and recently collected specimens revealed that Ansonia anotis Inger, Tan, and Yambun, 2001 and Pedostibes maculatus (Mocquard, 1890), both described from Kinabalu, Sabah, Malaysia, are hardly differentiated morphologically. Analyses of a total of 2,427 bp of the 12S rRNA, tRNAval, and 16S mitochondrial rRNA genes revealed that the two species are very close genetically. Thus A. anotis is regarded as conspecific and is synonymized with P. maculatus. Genetically, this species proved to form a lineage distinct from other bufonids from Southeast Asia, including species of Ansonia and Pedostibes. Because the species has also some unique morphological traits different from known bufonid genera, we propose to establish a new genus for Nectophryne maculata Mocquard, 1890. 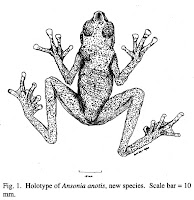 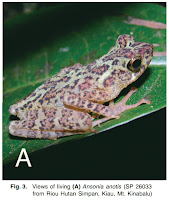