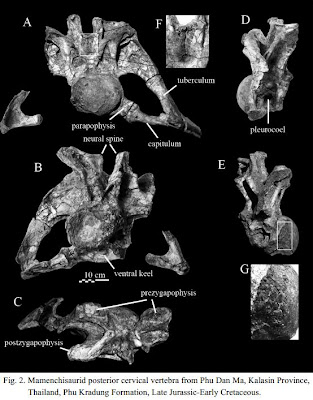 An isolated posterior cervical vertebra of a sauropod discovered at Phu Dan Ma (Kalasin Province, northeastern Thailand) is the first informative postcranial specimen from the Phu Kradung Formation, a Late Jurassic to Early Cretaceous continental unit. The vertebra is referred to the family Mamenchisauridae, otherwise mainly known from China. In addition, spatulate teeth from the same formation and a mid-dorsal vertebra from the Late Jurassic Khlong Min Formation of southern Thailand are reassigned to this family. The occurrence of mamenchisaurids in the earliest Cretaceous of Thailand supports a hypothesis of geographical isolation of Central, Eastern and Southeast Asia during the Late Jurassic. It also suggests that the main changes in their dinosaur assemblages occurred during the Early Cretaceous, rather than at the Jurassic-Cretaceous boundary. 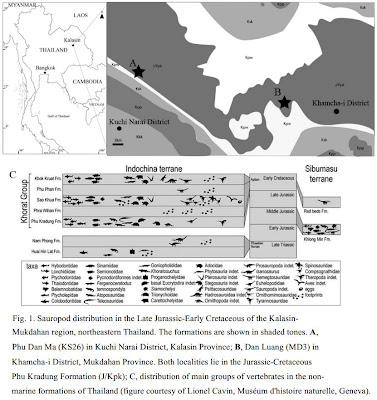