[Herpetology • 2012] Homalopsis mereljcoxi • The Masked Water Snakes of the Genus Homalopsis Kuhl & van Hasselt, 1822 (Serpentes, Homalopsidae), with the Description of A New Species 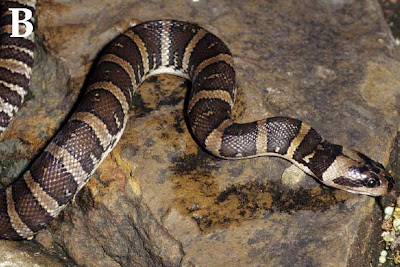 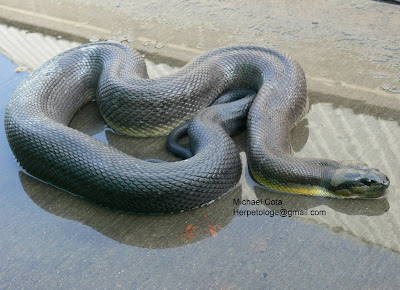 Abstract
Masked water snakes of the genus Homalopsis are abundant in the wetlands of Southeastern Asia. Currently, two species are recognized, the widespread H. buccata Linnaeus and the Mekong drainage endemic H. nigroventralis Deuve. On the basis of morphology we resurrect H. hardwickii Gray and H. semizonata Blyth and describe a new species from Indochina. We establish a neotype for Coluber buccatus Linnaeus and examine the status of other names associated with this species. Homalopsis species can be distinguished from each other on the basis of dorsal scale row counts, the scales in the ocular ring, and other head scale architecture. The new species, Homalopsis mereljcoxi, is distinguished from all others by its one postocular and one postsubocular scale, and a higher dorsal scale row count (40–47 scale rows at midbody) that are reduced to more than 30 scale rows at the body’s posterior. The new species is heavily exploited for the skin trade at Tonle Sap, Cambodia. Homalopsis likely contains other cryptic species that have evolved in the changing aquatic habitats of Southeast Asia. A key to the species of Homalopsis is provided. 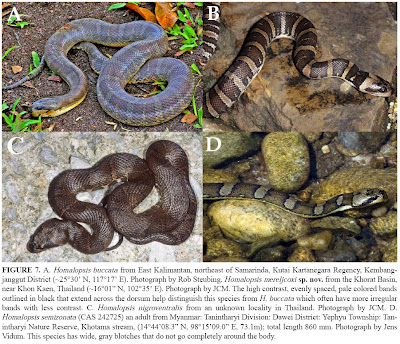 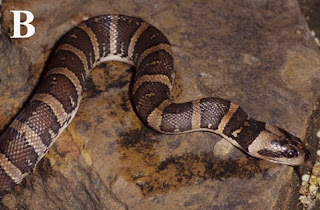 Etymology. This new species is named in in honor of Merel “Jack” Cox, for his years of dedication to the study of the snakes of Thailand.

Distribution. Homalopsis mereljcoxi is known from lowland localities in Thailand, Cambodia, and Vietnam. On the western edge of its known range it is found as far north as Bung Cho, Uttaradit Province, Phichai District (~12°N, 104°E), Thailand and as far south as Lake Songkhla (~7°N, 100°E), Thailand. In Vietnam it is found at least as far east as Can Tho Province (~10°N, 105°E) and as far south as Vinh Thuan District Town in Kien Giang Province (~9°N, 105°E). It is present in Cambodia’s Tonle Sap, and it most likely occurs throughout the lower elevations of the Chao Phraya and Mekong drainages. It is possible, but unclear, if this species inhabits Myanmar. Gyi (1970) reports Myanmar Homalopsis with 39–43 middorsal scale rows, Homalopsis semizonata Blyth, 1855 inhabits the area on both side of the Gulf of Martaban and the Ayeyarwady delta and it has 38-43 scale rows which overlap the range of scale rows for H. mereljcoxi.

Natural history. Many authors have discussed the natural history of this species (Saint Girons 1972; Brooks et al. 2007, 2010; Karns et al. 2005, 2010) under the name Homalopsis buccata. The morphology of this species agrees well with the Cambodia specimens described by Saint Girons (1972), however his data included ventral counts of 154–180, a range with some specimens below the lower end of the range observed in our sample. Cambodian specimens with ventral counts lower than 160 (unpublished data) likely belong to one or more cryptic species.
In Thailand, the habitat used by Homalopsis mereljcoxi includes small reservoirs, ditches, ponds, streams, and shallow wetlands (Karns et al. 2005; 2010). Snakes were primarily obtained from fishers’ gill nets, one specimen was hand collected from a pond at night while it floated near the surface in an ambush posture. Saint Girons (1972) described similar habitats in Cambodia: streams, rivers, irrigation canals, marshes, reservoirs and the banks of lakes and rivers; he also reports it in shallow water at night and describes it resting in burrows or crevices in the bank during the day, noting that specimens move very little while on land. Individuals released into shallow water escaped without hesitation, but placed in a river with steep banks, the snakes immediately sought refuge along the shore.