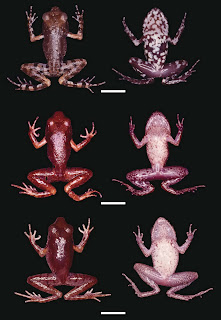 Abstract
Three new megophryid species, Leptolalax melanoleucus, L. fuliginosus, and L. solus, are described from southwestern and southern Thailand on the bases of acoustic and morphological characteristics. Leptolalax melanoleucus and L. fuliginosus are similar to L. pelodytoides from northern Thailand, but differ from it completely in advertisement call characteristics and ventral color. Leptolalax solus is similar to L. heteropus from peninsular Malaysia, but differs from it by advertisement call, as well as by some body proportions. The distributional pattern of Leptolalax within Thailand is discussed. 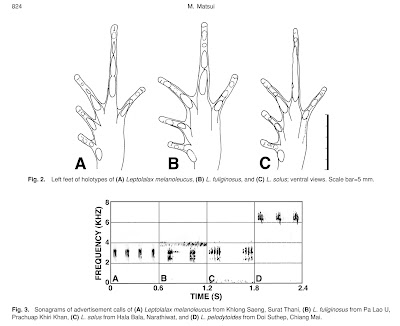 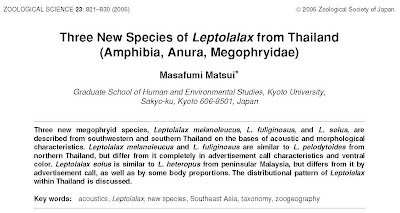 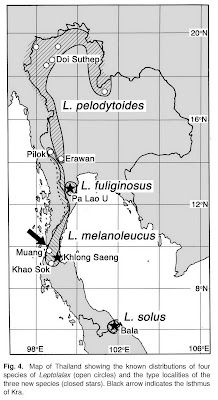 Fig. 4. Map of Thailand showing the known distributions of four species of Leptolalax (open circles) and the type localities of the three new species (closed stars). Black arrow indicates the Isthmus of Kra.

Diagnosis:
A medium-sized form of the genus Leptolalax; male 26.6–28.8 mm (n=13), female 32.7 mm (n=1) SVL; tibiotarsal articulation usually reaching between eye and nostril; similar to L. pelodytoides, but with much lower dominant frequency of advertisement call of 3050 to 3200 hz; differing from all congeners by unique ventral coloration, with large black markings on a white background.

Etymology: The specific epithet is from Greek meaning black and white, in reference to the contrasting ventral marking of the new species.

Natural History:
At both Khlong Saeng and Khao Sok, males were calling at night on the ground among dead leaves and stones, on slopes 1–10 m from small streams (width <2 m). Late August seems to be within the breeding season, as evidenced by a female releasing eggs on the night of collection at Khao Sok. In this female, no ova were left inside oviducts, but half-developed ova with a diameter of about 0.65 mm were seen in ovaries. Therefore, multiple breeding with short intervals is expected. Associated species at Khlong Saeng were Bufo parvus, Megophrys sp., Ingerana tasanae, Limnonectes blythi, L. doriae, L. kuhlii, Rana erythraea and R. nigrovittata, and those at Khao Sok were Bufo melanostictus, I. tasanae, Megophrys sp., Occidozyga sp., L. doriae, L. kuhlii, and R. erythraea. At Pilok, no calls were heard in early January, probably because it was very cool. A single individual was found among stones on the bank of a nearly dried small stream (width <2 m).

Diagnosis:
A medium-sized form of the genus Leptolalax; male 28.2–30.0 mm SVL (n=4); tibiotarsal articulation reaching anterior corner of eye; similar to L. pelodytoides, but with much lower dominant frequency of advertisement call of 2250 to 2430 hz and dusty ventral side of head and body; similar to L. melanoleucus in body shape, but with relatively shorter head, smaller eye and tympanum, and larger inner metatarsal tubercle.

Etymology: The specific epithet is a Latin word meaning dusty, in reference to the ventral color of the new species as compared to that of L. pelodytoides.

Natural History:
In mid-December, males were calling at night among stones and litter on the floor of a forest along a stream (width <5 m). Associated species observed were Bufo asper, Amolops panhai, Rana livida, R. nigrovittata, and Taylorana hascheana. 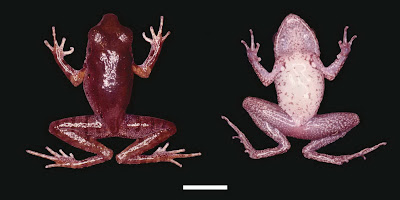 Diagnosis:
A medium-sized form of the genus Leptolalax, male 27.6 mm SVL (n=1); tibiotarsal articulation reaching nostril; more similar to L. heteropus than to L. pelodytoides, but differing from the former by relatively narrower head, longer hindlimb, and larger inner metatarsal tubercle, as well as by temporal pattern of advertisement call, with successive notes constant in duration.

Etymology: The specific epithet is a Latin word meaning single or lonely, alluding to the collection of only one male that began calling in captivity, where he could not attract a mate.

Natural History:
The male holotype was collected at night among rocks 10 m apart from a large stream (width <;5 m) in a rainforest. No calls were heard in the field, but in captivity the male intermittently called from midnight to early morning. Associated species on the night of collection were Bufo parvus, Amolops larutensis, Rana chalconota, and Limnonectes laticeps.