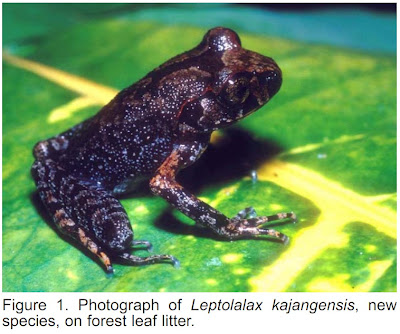 Leptolalax kajangensis
Grismer, Grismer & Youmans, 2004
Abstract
A new species of Leptolalax is described from a cave at the top of Gunung Kajang, Pulau Tioman, Pahang, West Malaysia. It differs from all other Malaysian species of Leptolalax in several aspects of coloration and in having smooth as opposed to rough or pebbled skin on the dorsum.
Key words. - Leptolalax, Anura, Tioman, Malaysia.
Type locality: "inside Gua [Cave] Tengkuk Air, Gunung Kajang, Pulau Tioman, Pahang, West Malaysia at 1000 m in elevation".
Holotype: ZRC 1.7714.
Etymology: This species is named after the type locality of Gunung Kajang, Pulau Tioman, West Malaysia
Synonyms
• Leptolalax kajangensis Grismer, Grismer & Youmans, 2004
• Leptolalax (Leptolalax) kajangensis — Delorme, Dubois, Grosjean & Ohler, 2006
Natural history: Both specimens of Leptolalax kajangensis were found in a cave (Gua Tengkuk Air) near the summit of Gunung Kajang at approximately 1000 m in elevation. This subterranean, obliquely oriented cavern is formed from the overhang of large boulders piled on
top of one another. It contains a small pond (3 m x 4 m) drained by a small subterranean stream (1-3 m in width by 2-4 cm in depth) running for 3-4 m along the cave floor. Both specimens of L. kajangensis were observed in the afternoon sitting on top of large rocks adjacent to the stream approximately 10 m from the entrance to the cave and approximately 10 m below the outside ground level. 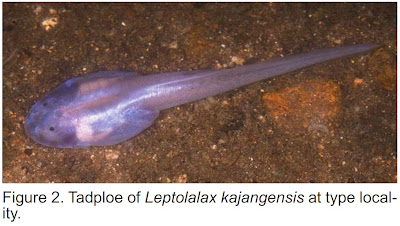 It was from the subterranean pond that Day (1990) collected "large tadpoles" he referred to as Leptobrachium sp. We observed additional tadpoles and assume these to be larvae of Leptolalax kajangensis based on the fact that the type material were collected from the same stream and adults were observed calling from the edge of the pond.
Biogeography: Pulau Tioman had a land positive connection with Peninsular Malaysia as late as the Pleistocene (Voris, 2000). The presence of amphibian species on Pulau Tioman such as Leptolalax kajangensis, Megophrys nasuta, Rana hosii, R. picturata and others that require streams with moderate to strong currents for reproduction suggests these species are unlikely candidates for long distance dispersal over flat, low-lying landscape (Inger and Voris, 2001). Pulau Tioman was part of a large granitic arc of mountains extending from what is currently peninsular Malaysia through the Kepulauan Anambas and Natunas across the Greater Sunda Shelf which provided a dispersal corridor for montane species (Inger and Voris, 2001) across the flat, low-lying exposed Sunda Shelf. Thus, the presence of stream-breeding species requiring moderate to fast flowing water on Pulau Tioman is most likely a result of vicariance.
Grismer, Grismer, and Youmans, 2004. A New Species of Leptolalax (Anura: Megophryidae) from Pulau Tioman, West Malaysia Asiat. Herpetol. Res. 10: 8.: http://www.asiatic-herpetological.org/Archive/Volume%2010/10_02.pdf
เขียนโดย pskhun ที่ 5:16 PM