Fig. 2 Anguilla luzonensis sp. nov. a Holotype, NSMT-P90000, 528 mm TL. b Broad maxillary bands of teeth from the holotype. c Paratype, NSMT-P90001, 682 mm TL, while fresh before preservation in formalin. Scale bars indicate 100 mm in a and c and 5 mm in b. The eel in c shows some damage due to capture and holding before being photographed

Abstract
Anguilla luzonensis, a new species of freshwater eel, family Anguillidae, is described on the basis of 29 specimens collected from the Pinacanauan River system, which is a tributary of the Cagayan River on northern Luzon Island of the Philippines. The new species and A. celebesensis, which is distributed in the same region, both have variegated color marking and broad maxillary bands of teeth, but show statistically signiﬁcant differences in the following characters of the new species: predorsal-ﬁn length 28.6–33.1% of total length (TL); preanal length 39.6–44.8% of TL; trunk length 26.4–31.3% of TL; distance between the verticals through the anus and origin of the dorsal ﬁn 9.3–13.9% of TL; length of gape 35.5–46.9% of head length; the total number of vertebrae 103–107; and number of abdominal vertebrae 40–42. These morphological differences, together with the present knowledge about anguillid eel taxonomy, genetics, and ecology, strongly support the presence of the new species A. luzonensis in the area of northern Luzon Island of the Philippines. 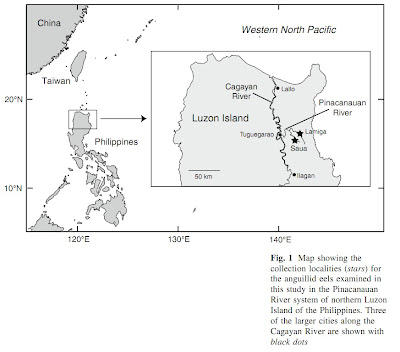 Fig. 1 Map showing the collection localities (stars) for the anguillid eels examined in this study in the Pinacanauan River system of northern Luzon Island of the Philippines. Three of the larger cities along the Cagayan River are shown with black dots

Distribution: Currently known only in the upper reaches of the Pinacanauan River system, which is a tributary of the Cagayan River in northern Luzon Island, the Philippines (Fig. 1).

Etymology: The species name is derived from Luzon Island where the type locality is situated with the Latin sufﬁx -ensis.