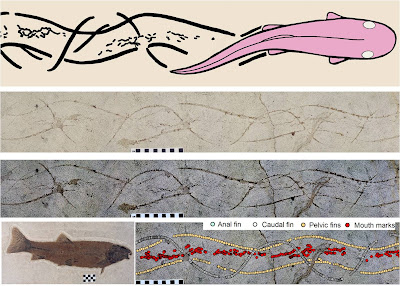 Background
The Green River Formation (early Eocene, about 42–53 Ma) at and near Fossil Butte National Monument in Wyoming, USA, is world famous for its exquisitely preserved freshwater teleost fish in the former Fossil Lake. Nonetheless, trace fossils attributed to fish interacting with the lake bottom are apparently rare, and have not been associated directly with any fish species. Here we interpret the first known feeding and swimming trace fossil of the teleost Notogoneus osculus Cope (Teleostei: Gonorynchidae), which is also represented as a body fossil in the same stratum.
Methodology/Principal Findings
A standard description of the trace fossil, identified as Undichna cf. U. simplicatas, was augmented by high-resolution digital images and spatial and mathematical analyses, which allowed for detailed interpretations of the anatomy, swimming mode, feeding behavior, and body size of the tracemaker. Our analysis indicates that the tracemaker was about 45 cm long; used its caudal, anal, and pelvic fins (the posterior half of its body) to make the swimming traces; and used a ventrally oriented mouth to make overlapping feeding marks. We hypothesize that the tracemaker was an adult Notogoneus osculus.
Conclusions/Significance
Our results are the first to link a specific teleost tracemaker with a trace fossil from the Green River Formation, while also interpreting the size and relative age of the tracemaker. The normal feeding and swimming behaviors indicated by the trace fossil indicate temporarily oxygenated benthic conditions in the deepest part of Fossil Lake, counter to most paleoecological interpretations of this deposit. Lastly, our spatial and mathematical analyses significantly update and advance previous approaches to the study of teleost trace fossils. 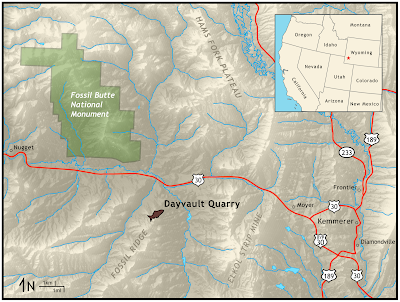 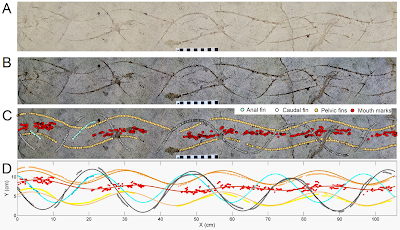