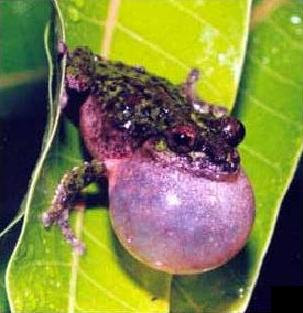 Raorchestes (Philautus) nerostagona
(Biju & Bossuyt, 2005)
Abstract
A new frog of the genus Philautus is described from Wayanad district in the Western Ghats of India. It differs from all its congeners by the combination of webbed fingers, nearly fully webbed toes and a distinct dermal fringe along the outer margin of the fore- and hind limbs. Philautus nerostagona sp. nov. exhibits several characteristics suggesting that it is strongly adapted to life in the upper layers of the rainforest.
Type locality: "at an altitude of 1000 m asl, from Kalpatta, 11° 38´ N, 76° 08´ E, North of the Palghat Gap, Wayanad district, Kerala, India".
Holotype: BNHM 4244. 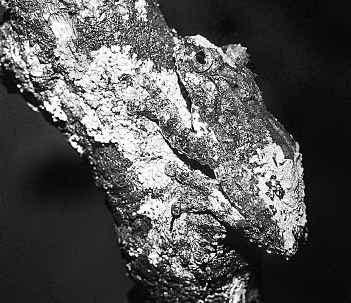 The Wayanad frog can change its hue to all conceivable patterns to effect perfect camouflage with its surroundings.
THIRUVANANTHAPURAM, MARCH 24. A `blup-blup' sound resembling that of water drops falling on a stagnant pool could be heard coming from high up the trees in the Wayanad forests during the monsoon. The source of this sound had remained a mystery to researchers for decades.
Six years ago, the naturalists Anil Zachariah and P.K. Uthaman found that it was the call of a canopy frog that had made the high branches of the trees its home. Soon, the frog expert S.D. Biju was after the hitherto unknown creature, scouring these rainforests in the Western Ghats for a specimen.
Locating this strange frog was a real challenge and, ultimately, when he succeeded, it was found perching perfectly camouflaged on a branch more than 20 metres high.
Dr. Biju, who is now doing research in Brussels Free University in Belgium, and Franky Bossuyt of the same institution, recently identified that the frog belongs to an entirely new species. They have reported their find, Philautus nerostagona, in a recent issue of the Current Science.
:: Canopy frog spotted in Wayanad: http://www.hindu.com/2005/03/25/stories/2005032508240500.htm
Raining frogs
WILDLIFE ecology debates always wildly swing from doomsday oracles of decimation of species to the exotica of the never-before-found species. The discovery of yet another frog in the Western Ghats has again brought to the fore the controversy about the constant pressure on ecologists to find new species. The new frog, from the genus Philautus, has been described from Wayanad district in Kerala by S D Biju and Franky Bossuyt, in a paper published in Current Science (Vol 88, No 1).
Philautus nerostagona, the paper claims, differs from other frogs of the same genus by the combination of webbed fingers, nearly fully webbed toes and a distinct dermal fringe along the outer margin of the fore- and hind limbs. Its features suggest it inhabits the upper layers of the rainforest.
:: Raining frogs: http://downtoearth.org.in/node/9282
เขียนโดย pskhun ที่ 9:16 PM