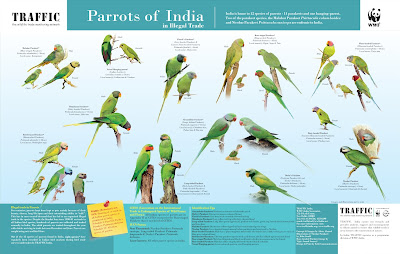 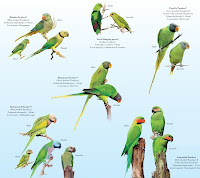 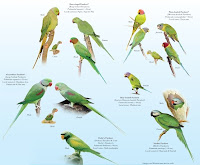 TRAFFIC helps to claw back illegal parrot trade in India

—A parrot in captivity is one of the more visible symbols of illegal trade in India, where all native wildlife is fully protected. To help enforcement officers identify the 12 native parrot species, and thereby clip the wings of the illegal bird trade, TRAFFIC India with support from WWF-India has produced an identification poster entitled “Parrots of India in Illegal Trade.”

The posters will be distributed to Police, Customs, Forest Departments, Railway Protection Forces and educational institutions including schools and colleges.

Despite the blanket ban since 1990-91 on trade in all Indian bird species, hundreds of parrots are collected and traded annually in the country.

They are taken from the wild and smuggled to various parts of India and beyond. The bulk of the trade is in three to four week old chicks. 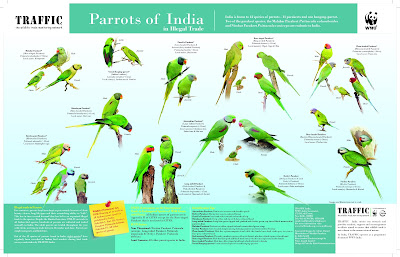 Parrots are caught using nets and bird-lime. Adult parrots are traded throughout the year, with chicks arriving in trade between December and June. For every bird that reaches the market place, several are believed to die en route.

Of the 12 native species, eight are regularly found being illegally traded. They include Alexandrine, Rose-ringed, Plum-headed, Red-breasted, Malabar, Himalayan and Finsch’s Parakeets and Vernal Hanging-parrot.

For centuries, parrots have been kept as pets mainly because they are straightforward to keep and easy to replace because of the large numbers in trade. This has in turn created demand that has led to an organized illegal trade in parrots. 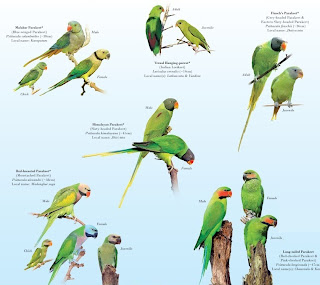 Abrar Ahmed, ornithologist and a bird trade consultant to TRAFFIC India said, “The Alexandrine Parakeet is one of the most sought after species in the Indian live bird trade and is traded in large volumes throughout the year.

“The chicks are collected from forested areas and transported to bird markets in Delhi, Mumbai, Hyderabad, Patna, Lucknow and Kolkata.

“Many specimens are smuggled by Indian dealers via Pakistan, Nepal and Bangladesh to bird markets in various parts of the world”.

MKS Pasha, Co-ordinator of TRAFFIC India said: “Few know that our favourite and well-known ‘mithu’ is a protected species in India. Their chicks are captured remorselessly from the wild, and many to not make it to their final destination.”

“The parrot trade is substantial and well organized, but it can be counteracted through concerted enforcement actions at the grassroot level and mass awareness campaigns.

“TRAFFIC India’s new poster is a step in this direction. We hope it will also inspire children and young people too, because they are the ones who will influence future change and can play a significant role in curtailing the demand for our native wildlife.” 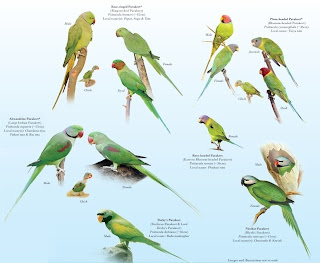