[Paleontology • 2013] Vectidraco daisymorrisae | ‘dragon from the Isle of Wight’ • A New Small-Bodied Azhdarchoid Pterosaur from the Lower Cretaceous of England and Its Implications for Pterosaur Anatomy, Diversity and Phylogeny

Background
Pterosaurs have been known from the Cretaceous sediments of the Isle of Wight (southern England, United Kingdom) since 1870. We describe the three-dimensional pelvic girdle and associated vertebrae of a small near-adult pterodactyloid from the Atherfield Clay Formation (lower Aptian, Lower Cretaceous). Despite acknowledged variation in the pterosaur pelvis, previous studies have not adequately sampled or incorporated pelvic characters into phylogenetic analyses.

Methodology/Principal Findings
The new specimen represents the new taxon Vectidraco daisymorrisae gen. et sp. nov., diagnosed by the presence of a concavity posterodorsal to the acetabulum and the form of its postacetabular process on the ilium. Several characters suggest that Vectidraco belongs to Azhdarchoidea. We constructed a pelvis-only phylogenetic analysis to test whether the pterosaur pelvis carries a useful phylogenetic signal. Resolution in recovered trees was poor, but they approximately matched trees recovered from analyses of total evidence. We also added Vectidraco and our pelvic characters to an existing total-evidence matrix for pterosaurs. Both analyses recovered Vectidraco within Azhdarchoidea.

Conclusions/Significance
The Lower Cretaceous strata of western Europe have yielded members of several pterosaur lineages, but Aptian pterosaurs from western Europe are rare. With a pelvis length of 40 mm, the new animal would have had a total length of c. 350 mm, and a wingspan of c. 750 mm. Barremian and Aptian pterodactyloids from western Europe show that small-bodied azhdarchoids lived alongside ornithocheirids and istiodactylids. This assemblage is similar in terms of which lineages are represented to the coeval beds of Liaoning, China; however, the number of species and specimens present at Liaoning is much higher. While the general phylogenetic composition of western European and Chinese communities appear to have been approximately similar, the differences may be due to different palaeoenvironmental and depositional settings. The western Europe pterodactyloid record may therefore be artificially low in diversity due to preservational factors. 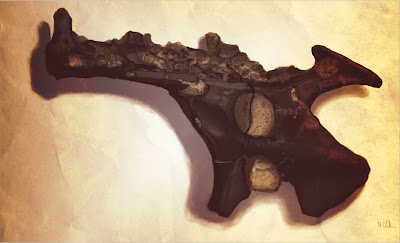 A new pterosaur from the Isle of Wight

Palaeontologists from the University of Southampton have made an exciting new discovery from the Isle of Wight – a completely new genus and species of small flying reptile, closely related to dinosaurs, called a ‘pterosaur’.

The pterosaur, which dates from 115 million years ago in the Lower Cretaceous, is currently known only from a well-preserved fossil pelvis, just 40 mm long, but that was enough for the researchers to work out that they were dealing with a new species. The discovery by University of Southampton researchers Dr Darren Naish, ‘fossil man’ Martin Simpson and Dr Gareth Dyke, who are based at the National Oceanography Centre Southampton, is published in the high-profile international journal PLoS One.

The fossil was found in 2008 by Daisy Morris, who was five at the time. In recognition of her find and the generous donation of the fossil by the Morris family to the Natural History Museum, the species has been named Vectidraco daisymorrisae in her honour. The generic name Vectidraco means ‘dragon from the Isle of Wight’ while the species name honours Daisy.

Several features of the Vectidraco fossil allowed the palaeontologists to work out that the species most probably belongs to a group of pterodactyloids called the azhdarchoids. Vectidraco grouped close to the tapejarids (a group of relatively small, short-snouted azhdarchoids known from Brazil, Spain and China), and was probably tapejarid-like in shape and lifestyle.

Dr Naish says: “Azhdarchoids are, in my opinion, among the most interesting of pterosaurs. All are from the Cretaceous, all are toothless, and many (perhaps all) were especially well adapted for life in terrestrial environments like woodlands, tropical forests and floodplains. Bony head crests are a typical feature of the group, as are adaptations in the fore- and hindlimbs for quadrupedal walking. As well as tapejarids, the group includes the somewhat larger thalassodromids (famous for their sail-like head crests), and the sometimes gigantic, long-snouted azhdarchids.”

By comparing Vectidraco to azhdarchoids known from better remains, it probably had a wingspan of about 75 cm, and was about 35 cm from snout to tail. In other words, it was similar in size to a gull or a large crow. It was probably crested, and with limb proportions that allowed it to be a reasonably good walker and runner on the ground and an expert flier when in cluttered habitats like forests.

One of the palaeontologists, Martin Simpson, has now written a children's book entitled ‘Daisy and the Isle of Wight Dragon’, about Daisy and her fossil collecting escapades.

Martin says: “The story highlights the special relationship between amateurs, academics and curators, in bringing these important finds to the attention of the scientific world. It also shows that, continuing a long tradition in palaeontology, major discoveries can be made by amateurs, often by being in the right place at the right time.”

The University of Southampton is home to the UK’s largest and most productive vertebrate palaeontology research group working on fossils from the Isle of Wight and collecting new ones.

Vectidraco daisymorrisae: Daisy, five, discovers dinosaur and scientists name it after her http://bit.ly/XYE7Bh via @MailOnline