Abstract
In this paper more than 50 incidences of bats being captured by spiders are reviewed. Bat-catching spiders have been reported from virtually every continent with the exception of Antarctica (~90% of the incidences occurring in the warmer areas of the globe between latitude 30° N and 30° S). Most reports refer to the Neotropics (42% of observed incidences), Asia (28.8%), and Australia-Papua New Guinea (13.5%). Bat-catching spiders belong to the mygalomorph family Theraphosidae and the araneomorph families Nephilidae, Araneidae, and Sparassidae. In addition to this, an attack attempt by a large araneomorph hunting spider of the family Pisauridae on an immature bat was witnessed. Eighty-eight percent of the reported incidences of bat catches were attributable to web-building spiders and 12% to hunting spiders. Large tropical orb-weavers of the genera Nephila and Eriophora in particular have been observed catching bats in their huge, strong orb-webs (of up to 1.5 m diameter). The majority of identifiable captured bats were small aerial insectivorous bats, belonging to the families Vespertilionidae (64%) and Emballonuridae (22%) and usually being among the most common bat species in their respective geographic area. While in some instances bats entangled in spider webs may have died of exhaustion, starvation, dehydration, and/or hyperthermia (i.e., non-predation death), there were numerous other instances where spiders were seen actively attacking, killing, and eating the captured bats (i.e., predation). This evidence suggests that spider predation on flying vertebrates is more widespread than previously assumed.

Bat-Eating Spiders Are Everywhere
There's only one place in the world to escape bat-catching spiders: Antarctica. These arachnids ensnare and pounce on bats everywhere else in the world, researchers say.

Bats rank among the most successful groups of mammals, with the more than 1,200 species of bats comprising about one-fifth of all mammal species. Other than owls, hawks and snakes, bats have few natural enemies.

Still, invertebrates — creatures without backbones — have been known to dine on bats. For instance, giant centipedes in a cave in Venezuela were seen killing and eating bats, and the arachnids known as whip spiders were spotted feeding on dead bats in caves of the Caribbean. Cockroaches have been observed feeding on bat pups that have fallen to the floor of caves.

Spider-eat-bat world
Accidental deaths of bats in spiderwebs were known as well, but were thought to happen very rarely. Still, spiders are known to occasionally dine on a variety of vertebrates — creatures with backbones. For instance, fishing spiders capture and devour fish and frogs; some species of wolf spiders, huntsman spiders, tarantulas and related spiders have been seen killing and eating frogs and lizards; and tarantulas and comb-footed spiders have apparently fed on snakes and mice. There are also numerous reports of spiders killing other flying vertebrates, snagging birds with large orb webs.

Recent studies of a web-building spider species (Argiope savignyi) and a tarantula species (Poecilotheria rufilata) both killing small bats led researchers to suggest that bat captures and kills due to spiders might be more frequent than previously thought. So they analyzed 100 years' worth of scientific reports, interviews of bat and spider researchers and the staff of bat hospitals, and scans of image and video sites. The search revealed 52 cases of bat-catching spiders worldwide.

Giant webs
Approximately 90 percent of known bat-catching spiders live in the warmer areas of the globe, in the third of the Earth surrounding the equator. About 40 percent live in the neotropics — the whole of South America, and the tropical regions of North America — while nearly a third live in Asia and more than a sixth live in Australia and Papua New Guinea.

Eighty-eight percent of the reported cases of bat catches were due to web-building spiders, with giant tropical orb-weaving spiders with a leg-span of 4 to 6 inches (10 to 15 centimeters) seen catching bats in huge, strong orb-webs up to 5 feet (1.5 meters) wide.

In instances seen in Costa Rica and Panama, the spiders had built their webs near buildings inhabited by bat colonies. Bat-catching via spiderwebs was also witnessed particularly often in the parks and forests of the greater Hong Kong area. Future research may investigate whether the huge webs that sometimes block the entrances of tropical bat caves in east and southeast Asia and the neotropics may occasionally snag any members of the giant swarms of bats that emerge from the caves at night.

The other 12 percent of cases of spider kills of bats were from spiders that hunt without webs. For instance, tarantulas were seen eating small bats in tropical rainforests in Peru and eastern Ecuador and on the forest floor in northeastern Brazil. A reddish parachute tarantula (Poecilotheria rufilata) was also seen predating on a small bat in Kerala, India, while a huntsman spider (Heteropoda venatoria) was observed capturing and killing a small bat in a shed near Kolkata, India. An attempt by a large fishing spider (Dolomedes triton) to kill a bat pup was also witnessed below a bridge in Indiana.

The victims
Most bat prey of spiders are small or juvenile insect-eating bats, and usually are among the most common bat species of their areas. Bats entangled in webs were usually 4 to 9.5 inches (10 to 24 cm) in wingspan, including some of the smallest species of bats in the world, and they sometimes died of exhaustion, starvation, dehydration or overheating — but there were many cases where spiders were seen actively attacking, killing and eating these victims.

Still, as scarce as spider captures of bats likely are, they would prove well worth the effort. The catch of a 2-gram bat by the giant orb-weaving spider Nephila pilipes, a common killer of bats, would be a bonanza about 10 times the mass of the average daily catch of insect prey, researchers noted. 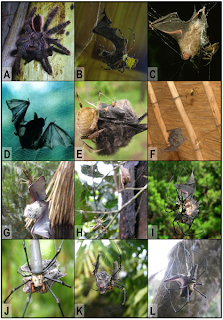