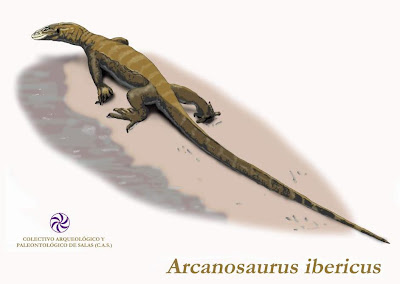 Abstract
A new anguimorph lizard from the late Barremian–Aptian of the Salas de los Infantes area (Cameros Basin, Iberian Peninsula) is described here as Arcanosaurus ibericus gen. et sp. nov. It corresponds to the first squamate remains from the Burgos Province. The unique combination of morphological and microanatomical characters enables us to erect a new genus and species that we tentatively assign to Varanoidea despite the strange seemingly absence on the axis of a posterior hypapophysis. The combination of both microanatomical and geological data suggests an essentially terrestrial mode of life. This discovery reveals itself particularly interesting concerning the evolutionary history of varanoids as this new Spanish taxon might correspond to the oldest terrestrial varanoid known to date.

Derivation of name. From the Spanish arcano (Latin, arcanus): mysterious.

Derivation of name. From the Latin ibericus, referring to the Iberian Peninsula.

Conclusion
The unique combination of characters observed in Arcanosaurus ibericus supports a tentative attribution to the Varanoidea. The analysis of the microanatomical and geological data suggests an essentially terrestrial mode of life for this Spanish new taxon. The oldest Varanoidea is the pythonomorph Kaganaias from the Valanginian–Hauterivian (Early Cretaceous) of Japan, thought to have lived in freshwater swampy environment far from the sea (Evans et al., 2006). The other oldest varanoids are known from the Late Cretaceous, in marine (pythonomorphs; review in Houssaye, in press) or terrestrial (e.g. Norell et al., 1992; Gao and Fox, 1996; Nydam, 2000; Laurent et al., 2002; Pereda Suberbiola, 2009) deposits. If Arcanosaurus ibericus, from the late Barremian–Aptian of the Burgos Province, indeed belongs to the Varanoidea, it would thus be the oldest terrestrial form known to date. The discovery of this new taxon in Spain is thus of particular interest regarding the evolutionary history of varanoids.