[Primatology • 2012] A Genome Sequence Resource for the Aye-Aye Daubentonia madagascariensis, a Nocturnal Lemur from Madagascar

Abstract
We present a high-coverage draft genome assembly of the aye-aye (Daubentonia madagascariensis), a highly unusual nocturnal primate from Madagascar. Our assembly totals ;3.0 billion bp (3.0 Gb), roughly the size of the human genome, comprised of ;2.6 million scaffolds (N50 scaffold size 5 13,597 bp) based on short paired-end sequencing reads. We compared the aye-aye genome sequence data with four other published primate genomes (human, chimpanzee, orangutan, and rhesus macaque) as well as with the mouse and dog genomes as nonprimate outgroups. Unexpectedly, we observed strong evidence for a relatively slow substitution rate in the aye-aye lineage compared with these and other primates. In fact, the aye-aye branch length is estimated to be ;10% shorter than that of the human lineage, which is known for its low substitution rate. This ﬁnding may be explained, in part, by the protracted aye-aye life-history pattern, including late weaning and age of ﬁrst reproduction relative to other lemurs. Additionally, the availability of this draft lemur genome sequence allowed us to polarize nucleotide and protein sequence changes to the ancestral primate lineage—a critical period in primate evolution, for which the relevant fossil record is sparse. Finally, we identiﬁed 293,800 high-conﬁdence single nucleotide polymorphisms in the donor individual for our aye-aye genome sequence, a captive-born individual from two wild-born parents. The resulting heterozygosity estimate of 0.051% is the lowest of any primate studied to date, which is understandable considering the aye-aye’s extensive home-range size and relatively low population densities. Yet this level of genetic diversity also suggests that conservation efforts beneﬁting this unusual species should be prioritized, especially in the face of the accelerating degradation and fragmentation of Madagascar’s forests. 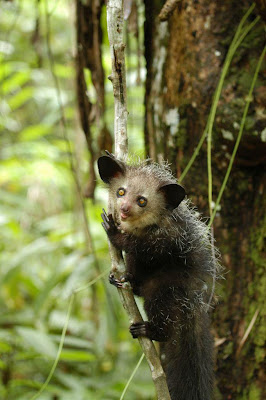 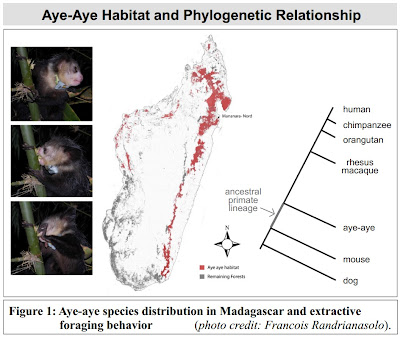