[Ornithology • 1999] Glaucidium nubicola | Cloud-forest Pygmy-Owl • A new species of Pygmy-owl (Strigidae: Glaucidium) from the Pacific slope of the Northern Andes

Abstract
We describe a new species of pygmy-owl that is restricted to very wet cloud forest at 1,400 to 2,000 m in elevation along the Pacific slope of the western Andes of Colombia and Ecuador. This taxon had been long overlooked as a result of its morphological similarity and geographic proximity to the Andean Pygmy-Owl (Glaucidium jardinii), but it is vocally very distinct and exhibits subtle but consistent morphological differences as well. Vocally, the new species is most similar to the Costa Rican-Panamanian form G. costaricanum and to the nominate subspecies of Northern Pygmy-Owl (G. gnoma), but again, consistent differences exist in vocalizations and morphology. Glaucidium costaricanum has long been considered a subspecies of G. jardinii, but at least one recent author treated it as a subspecies of G. gnoma. Genetic, vocal, ecological, and morphological data indicate that G. costaricanum should be elevated to species level, and it along with the new species are considered allospecies within the Northern Pygmy-Owl superspecies complex. 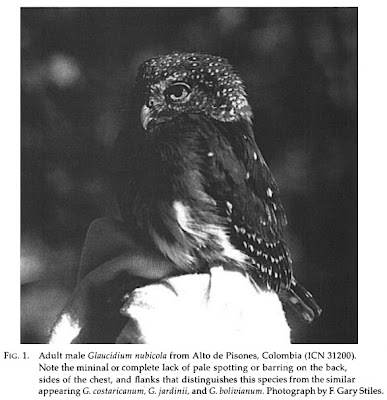 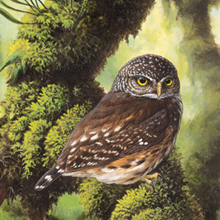