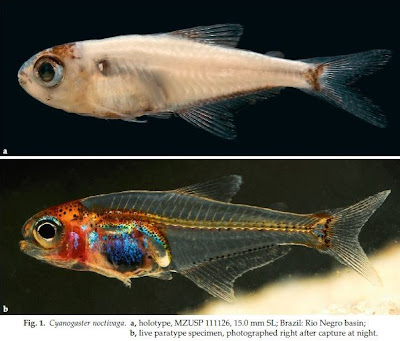 Cyanogaster noctivaga, new genus, new species, is described from the Rio Negro, Brazil. It is a miniature fish of the Characidae belonging to the Stevardiinae based on the presence of ii + 8 dorsal-fin rays and four teeth in the inner premaxillary tooth series. The new taxon can be distinguished from all other members of the Stevardiinae by having the reduced number of i + 5 pelvic-fin rays and the presence of a single conical tooth in the outer premaxillary tooth series. Other non-exclusive diagnostic features of Cyanogaster within the Stevardiinae are the lack of maxillary teeth, the incomplete lateral line, transparency of the body and conspicuous blue abdominal region. Mature males have hooks on the pelvic- and anal-fin rays. A detailed osteological description of the new genus and species is is presented with comments on its putative relationships.