Abstract
The number of newly discovered Malagasy vertebrate taxa has multiplied in recent years, emphasizing the importance of complete taxon sampling for phylogenetics, biogeography, functional ecology, and conservation biology, especially in such a biodiversity hotspot. In particular, the diversity of extant lemurs is much higher than previously thought, and we have yet to comprehend fully the full extent of lemuriform biodiversity. A recent genetic analysis of mtDNA and nDNA sequence data in Malagasy mouse lemurs revealed the existence of several novel mtDNA clades based on new field sampling. These geographically defined and previously unrecognized mtDNA clades corresponded precisely to patterns of population structure revealed in the analysis of the nDNA data, thus confirming their evolutionary divergence from other mouse lemur clades. Two of these independently evolving lineages correspond to specimens that were collected by us in the Marolambo and Manantantely/Ivorona regions. Here we summarize the genetic evidence and report on the morphometric and external characteristics of these animals, formally describing them as new species. This report thus brings the number of currently recognized and described mouse lemur species to 20. The forests in which these mouse lemurs were discovered have been heavily degraded in the past decade, prompting the classification of one of the new species as Endangered by the IUCN, even before its formal description. As with several other newly described lemur species, immediate field studies and appropriate conservation actions are therefore urgent.


Scientists have discovered two new species of mouse lemurs in Madagascar, bringing the total number of diminutive primates known to science to 20, according to a paper published in the latest issue of the International Journal of Primatology.

Both species are unusually large for mouse lemurs. Microcebus marohita tips the scales at 78 grams (2.8 ounces), making it the largest of the known mouse lemur. It reaches a length of 28 cm. Microcebus tanosi is now the second largest known mouse lemur, reaching 27 cm from snout to tail and weighing about 50 grams. It is named after the Anosy region in southeast Madagascar. 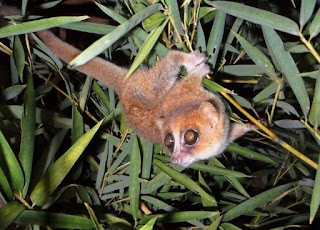