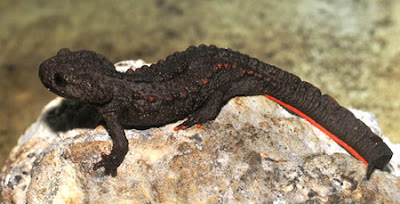 A group of Vietnamese and Japanese scientists have found a new species of newt in the northern mountainous areas of Ha Giang and Cao Bang provinces.

The Vietnam National Museum of Nature announced Tuesday on its website (http://VNMN.ac.vn) that the recently-discovered Tylototriton ziegleri, was named after Dr. Thomas Ziegler from the Cologne Zoo in Germany.

Ziegler has made many contributions to biodiversity conservation and research in Vietnam, according to the museum.
Nguyen Thien Tao, a member of the research group, said male and female Tylototriton ziegleri grow an estimated 54-68 millimeters and 71 millimeters long, respectively, without their tails.

The newt has rough, dark brown or black skin with tiny bumps on it, a long furrow along its back and lines of large nodules on both sides of the body, as well as thin, long legs and thin tails. There are also orange marks on the nodules, at the end of its limbs, its anus, and parts of the tails.

According to Tao, there are seven types of newts found in Vietnam, with Paramesotriton deloustali (also known as Tam Dao salamander), Tylototriton vietnamensis (Vietnamese crocodile newt) and the new Tylototriton ziegleri only found in northern Vietnam.

This discovery, which has been published in the Japanese magazine Current Herpetology, is the result of cooperation between the Vietnam National Museum of Nature and Japan’s Kyoto University.